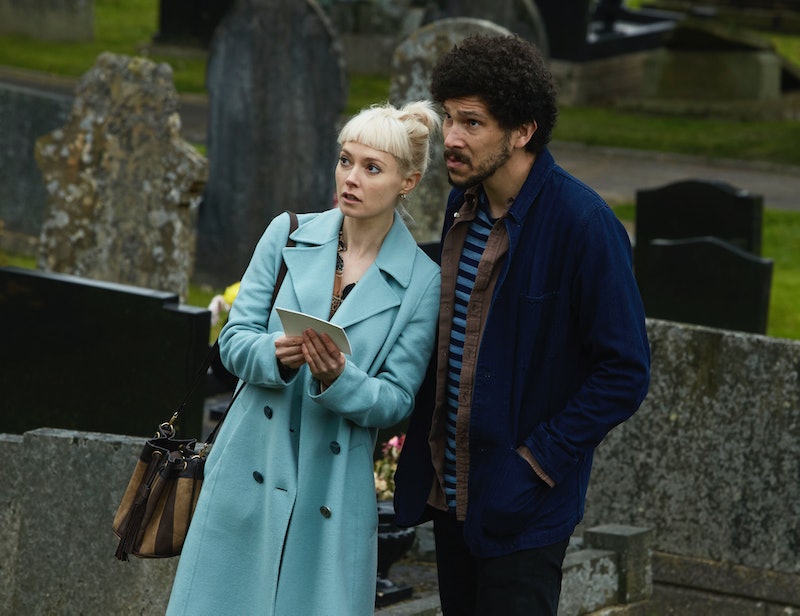 An essential part of growing up is finding out that your parents are much more complicated people than you probably assumed. No one fully knows their parents — or anyone, really — but the BBC series Requiem, premiering on Netflix on March 23, takes that idea to the extreme. While the central mystery of the horror-thriller is fictitious, and Requiem itself is not a true story, the relationship at the center is loosely based on the life of the show's creator Kris Mrksa. And some of the more supernatural elements actually take inspiration from another real person.

Requiem begins with prolific cellist Matilda Grey dealing with her mother's unexpected suicide. While digging through her mother's personal belongings, Grey discovers some curious newspaper articles and a videotape that links her with the 1995 disappearance of a young child from a small Welsh town. Her relationship with her mother is suddenly forever changed, and she begins a journey to find the truth about her mother and how she could have been connected to this years-old disappearance.

Mrksa told BBC about his writing process, "I often have two or three ideas kicking around. Then I suddenly realize they fit together and I have something to run with. The first kernel was the death of my mother — I realized that a whole part of my life had died with her." Requiem begins with the emotional impact of losing a parent, and then spins that grief into a thriller that goes to very unexpected places.

"Losing a parent is a loss that strikes at one’s identity," he continued, in his BBC interview. "Identity is something that I have always been fascinated by. I think the idea that we are all a unified individual is more illusory than we recognize. So I began to combine a philosophical idea about identity with the theme of grappling with loss." Matilda's exploration of her mother's life and the cold case she's connected to serves as the beginning point of the series. But as the show continues it begins to introduce some paranormal influences that take the show into unsettling territory.

Spoilers for Requiem. While the show begins as a realistic thriller, the show goes from strange to stranger when Matilda discovers that someone is attempting to use children to communicate with angels, according to The Telegraph. While less relatable than losing a parent, this plot line reflects the work of a 16th century man who attempted to do just that. Per The Express, Dee was astrologer to Elizabeth I and claimed to be able to talk with angels and spiritual beings. A spokesperson for the show confirmed to the publication that Dee inspired some of Requiem's plot points.

Dee had some unconventional beliefs, but his status made him one of the most sought-after academics of his time. Per Encyclopedia Britannica, Dee obtained a master's degree in mathematics from St. John's College in Cambridge before going to London to obtain a position within the Royal Court. Dee served as an advisor and consult to the court on the matters of everything from math to medicine. In the latter half of the 16th century, Dee's interests turned to the possibility of using mathematics to discover the nature of the divine, and began working with a medium by the name of Edward Kelley to hold frequent seances.

Records of their angelic sessions, per The Telegraph, ranged from holy quests to suspicious proposals. At one point, Dee and Kelley claimed that the angel Uriel instructed them to visit Czech Emperors and inform them that they could create the philosopher's stone, an object that was believed to have the ability to turn common metals like iron and copper into silver and gold. Another notable seance resulted in Kelley telling Dee that an otherworldly spirit had informed Kelley that him and Dee must have sex with each other's wives. Whether Kelley was a true believer or was merely trying to pull one over on Dee, it seems that Dee was headstrong in his beliefs that the answers to the unseen parts of the universe lie in mathematics. Requiem isn't as interested in mathematics as Dee was, but it does share the historical figure's fascination in the intersections between life and death, as well as what forces are controlling the fate of humanity.

Requiem suggests that his son Theodore Dee continued his father's work, and he's mentioned as a past resident of a mysterious manor house involved in the mystery of the show. But The Telegraph reported that consensus among historians is that Theodore Dee died at the age of 13.

Requiem combines the common human experience of losing a parent with the studies of 16th-century eccentrics to provide a chilling meditation on death. Looked at all together, the series is not a true story, but the emotional experiences and history at its core are as real as they come.