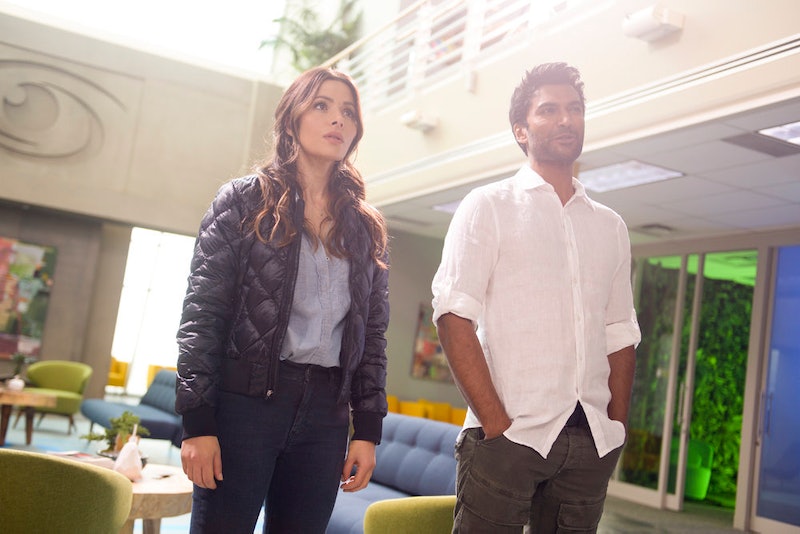 If you immediately considered making your own totem after watching Leonardo DiCaprio in Inception, then NBC's newest sci-fi drama is definitely for you. Reverie, which premieres on May 30, is all about a (fictional) program that allows people to stay suspended in their own dreams, living out their greatest fantasies. But is such technology really possible? Is Reverie real? Well, not exactly in the way that it happens on the show, but that doesn't mean scientists aren't already working on ways to harness the power of REM for more than just a good night's sleep.

According to the official synopsis of Reverie, some of the users find their carefully crafted and VR-induced dreams preferable to being awake, and are unable to come out of their trance. Enter Mara Kint (played by Sarah Shahi), a former hostage negotiator that gets hired to jump into people's dreams, Cobb-style, and pull them back into reality. How close is this to becoming a reality? In times when it's tough to separate Black Mirror from real life, how close is technology to being able to manipulate our dreams?

In a July 29, 2010 Forbes article titled "The Science of Inception," published just after the movie came out, scientist John Gallant of UC Berkeley explains that his area of research centers around using fMRI technology to replicate images from people's minds. Currently, though, this is limited to people's waking thoughts, as dream thoughts are too hard to verify with any real accuracy.

And as for planting thoughts in other people's brains? That's also a long way off, if not out of the question. Gallant explained to Forbes:

"You have to have a way to manipulate specific neurons and synapses in specific ways — and that's really difficult and not going to happen anytime soon. I think it's legitimate for some people to have some concerns about brain-reading technology being used for bad things, but nobody has to be worried about one of those bad things being writing stuff to the brain."

If you really want to control your dreams, Reverie-style, your best bet at the moment is to look into lucid dreaming. Lucid dreaming refers to the concept of being aware that you're dreaming while you're still dreaming. And in some cases, people are able to elicit control over their dreams while they're happening, doing nifty stuff like fly or try on Belle's signature golden gown from Beauty and the Beast. So how can you lucid dream? Bustle writer Kaitlyn Wilde suggests five tips to train your mind to lucid dream, including powering down all technology at the end of the day and checking in with yourself about what it is you really want to see and do in your active dream state. If those tricks still aren't enough, here are seven books on lucid dreaming to help you become an expert on controlling your subconscious.

Like in Reverie, there are supposedly ways to induce lucid dreaming with chemicals, but it doesn't come all that highly recommended. Abigail Moss, who writes for Vice's Motherboard column, explained that she tried the lucid dreaming supplement called Dream Leaf, but wound up with mixed success. While she did manage to achieve a lucid dream, psychologist Ian Wallace told her it may have just been due to the placebo effect, and warned that there aren't really any shortcuts when it comes to lucid dreaming. Supplements might actually make it harder or impossible to reach lucid dreams naturally.

Ok, so there actually is a sleep-related company called Reverie, but rather than infiltrating people's subconscious with electricity and chemical IVs, they're into slightly more traditional sleep tech: bed design. Brandon Berman, a sleep research expert at the company, actually talked to Bustle in 2016 about how you can control the quality of your sleep merely by adjusting your sleeping position. Berman told Bustle that proper sleeping position can help with everything from spinal alignment to preventing wrinkles. Best of all? No highly-trained hostage negotiator necessary; just a regular old alarm clock should be enough to bring you back to the land of the waking.