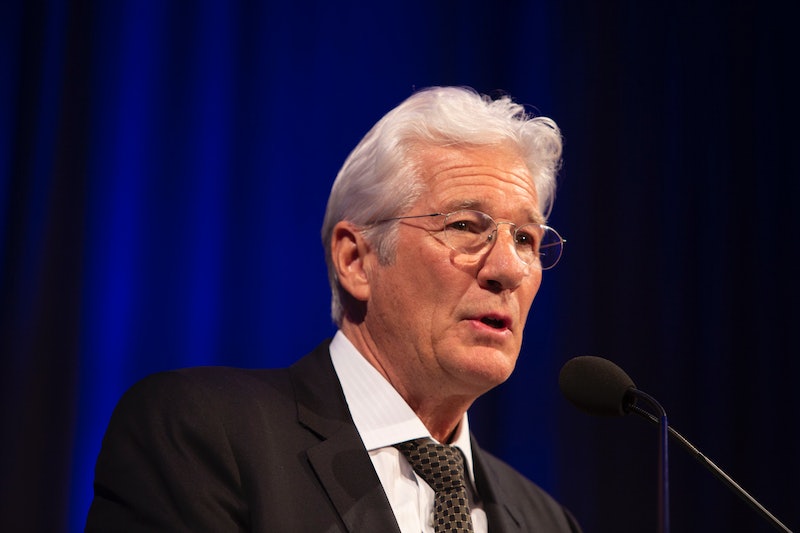 Whether it's balling around in an officer's uniform or scaling the fire escape of his love's apartment block — Richard Gere is a veritable legend of the silver screen. As well as a legend of the silver fox variety. Owing to this, his latest turn on the telly as Max Finch in the BBC's MotherFather is likely to set pulses racing across the UK. But should these pulses hold out hope of being swept off their feet, or is Richard Gere married?

Prepare yourself for heartache because, yes, bae is married. I know right? Gere married his long-time partner Alejandra Silva last year in a super low-key civil ceremony in her native Spain, as Harper's Bazaar reports. The couple followed up the intimate affair with another celebration at a later date, according to the People.

Shortly after the nuptials, Gere and Silva announced they were expecting a baby. Wow, no messing about here is there? It was last month (Feb. 2019) that the happy couple welcomed a sweet baby angel little boy and chose to name him Alexander.

So, has their new baby and wedded bliss meant retirement for Gere? Hell no! In fact, it seems like he has had a whole new lease of creative life and is ready to open an entirely new chapter of his career. Telly. You heard me right, this esteemed actor is a part of an upcoming TV series that looks like it is going to blow your socks off.

As previously mentioned, Gere stars as Max Finch in MotherFatherSon, a gripping new BBC thriller. Finch is an uber rich and successful media tycoon who has power beyond the cash in his bank account. Or accounts. Some of which we can assume are off shore.

Anyhow, his power is not only financial, but political too. Having control of a media empire means that he is able to control the will of the people, their opinions, and (scarily) who they elect into power. In this series, the politics involved are the populist variety (you know, the kind which is currently cleaving our world apart as we speak?). Speaking to the BBC, Gere said he is happy to see questions regarding power structures being brought into our living rooms:

"I see populism in the US, and it’s obviously happening here in Europe, and Asia. It’s happening everywhere. So that’s the context for this very human story. I think that’s unusual and it’s why I feel MotherFatherSon is Shakespearian in scale. It’s got real human honesty, but also a vastness in its ambition of dealing with big questions."

Things begin to change and rapidly disintegrate as Finch is forced to deal with a family tragedy. The gravity and reality of people who are in power not being impermeable to personal devastation is the uniqueness of this show. Gere is proud of the beautiful chaos in this story:

"I can only speak for myself, but it’s rare to see this kind of depth and presentation of — not just characters — but human dilemmas, emotions and thoughts, and confusion, and people trying to do the right thing, trying to do well and tripping over themselves and everyone they care about," the actor told the BBC.

Watch MotherFatherSon on BBC One March 6 at 9 p.m.