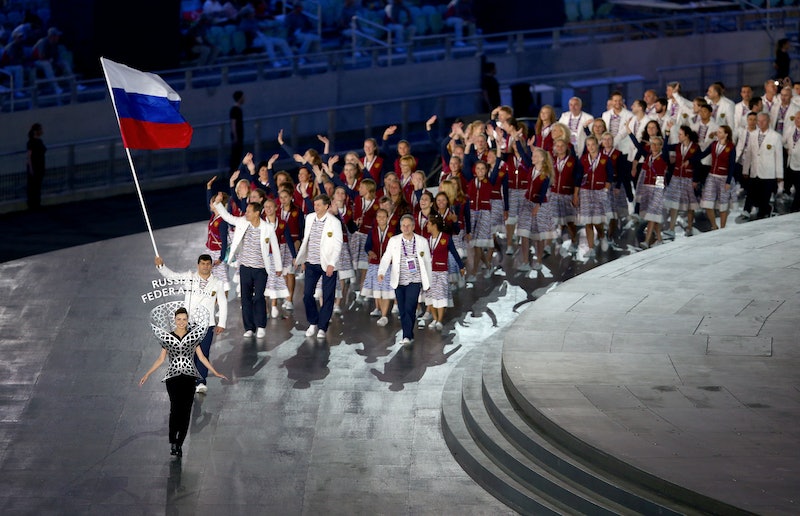 The news that the International Olympic Committee had banned Russia from competing in the 2018 PyeongChang games made a big splash — but it might not make as big of a difference as you think. In fact, you could see dozens of Russia athletes competing in the 2018 Winter Olympics. While they will not be adorned with the Russian flag and their victories won't go towards Russia's medal count, the Russian athletes who can prove themselves to be clean will be allowed to compete under a neutral flag, labeled as “Olympic Athletes from Russia.”

When the IOC banned Russia from the 2018 Games, it was the biggest punishment that the governing body of the Olympic Games had ever laid down upon a country. The decision came in response to a state-sponsored doping program rivaled only — but not surpassed — by the East German program from the 1960s to the 1980s. During that time, East German officials gave many of their Olympic athletes anabolic steroids. While the athletes competing against them often suspected their East German competitors of doping, the full information about the extent of the program didn't come out until well after the country had already ceased to exist. This is a different situation, though, because there are still Russian athletes who worked hard to qualify for the games. So, the IOC's decision to ban Russia as a country also included a set of strict rules through which clean Russian athletes would be able to participate.

"As an athlete myself, I feel very sorry for all the clean athletes from all NOCs who are suffering from this manipulation," said Thomas Bach, president of the IOC, according to Olympic.org. "Working with the IOC Athletes’ Commission, we will now look for opportunities to make up for the moments they have missed on the finish line or on the podium."

Now, Russian news agency TASS reports that the Russian Olympic Committee has submitted a list of 350 athletes who want to compete under the neutral colors, and it's up to the IOC to decide whether all of them will be allowed to compete. The original Russian Olympic team was supposed to include 633 athletes, so 350 is actually a significant reduction. Now, however, the New York Times reported that just days prior to the Opening Ceremony, 47 Russian athletes are appealing the IOC's decision to ban them. A handful of those athletes didn't get involved in the case until Wednesday.

While it would certainly be unfair to ban athletes from competing when they've followed the rules and worked hard to be there, some have also expressed concern that this benevolent decision won't allow the ban to be enough of a deterrent for future doping. Part of the argument lies in the fact that it's entirely possible that even athletes tested as clean simply had a way of doping but avoiding getting caught. Another is one that has been evidenced in Russian media — even without the Russian flag, Russian athletes will be recognized as Russian. And therefore, their victories will still be seen as belonging to Russia.

This was of particular concern for one group of Russian athletes, who make up about 10 percent of the overall 200 expected to compete: the Russian hockey team. The so-called Red Machine will be gunning for the gold, even without their red jerseys (they'll be wearing white instead). And they've got a bigger than normal chance to win it in PyeongChang, as Russia's Kontinental Hockey League has allowed its players to go the Games — whereas the NHL has not done the same.

The KHL is the second best hockey league in the world, and it's where most of the Russian hockey players usually play. They'll be competing against college, minor, or junior league players from the United States, Canada, and Europe. None of those teams, however, are expected to rival the NHL or the KHL in depth or skill. Anything besides a Russian gold — or, rather, a gold for the Olympic hockey players from Russia — would be a surprising upset.

This also isn't the first time Russian athletes have been punished for doping. Over 118 Russian athletes were already disallowed from competing in the 2016 Rio de Janeiro Games because of doping, which left their 2016 roster at 271. This year's games will be missing the Russian athletes caught doping, the Russian jerseys, and the recognizable Russian national anthem. Instead, Olympic athletes from Russia who win gold medals will see the Olympic flag rise behind them, and hear the Olympic anthem. But other than that, not much will change.