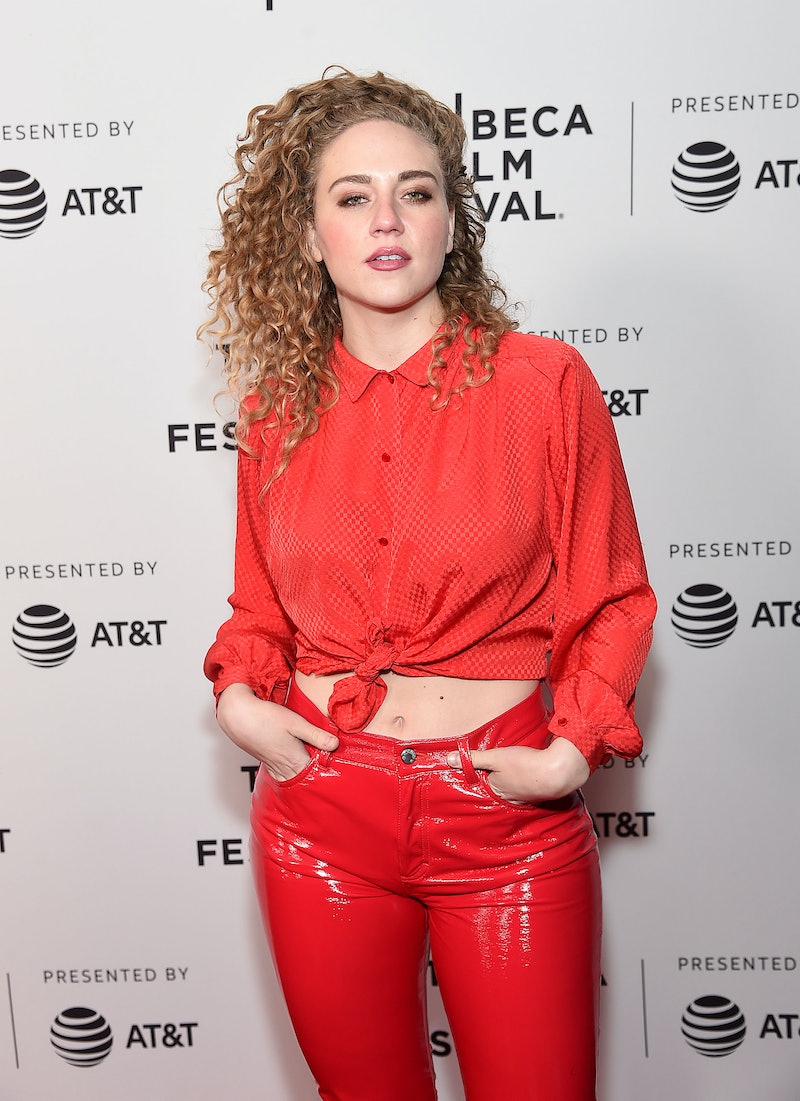 Netflix's Trinkets centers around three high school girls, but there are number of other characters who add depth to their world. For example, Elodie (Brianna Hildebrand) has a love interest on Trinkets — Sabine, who is a real singer offscreen, too. Well, the actor who plays her is.

While Trinkets star Katrina Cunningham is a singer first and foremost, she has appeared in a handful of other projects — most notably HBO's The Deuce, in which she played Christina Fuego opposite James Franco. As for her music — for which she goes by Kat Cunning — it has a dreamy, ethereal quality akin to Lana Del Rey, FKA Twigs, or Sky Ferreira. According to her For the Record bio, Cunningham has performed on Broadway in shows like Dangerous Liaisons, an off-broadway Burlesque production, Cirque Du Soleil's Paramour, the McKittrick Hotel's Sleep No More, and at New York venue House of Yes.

"It all started with dance, for me," she told People. "I was a very, very intense ballerina when I was younger, and I started when I was 3 years old." However, she decided to quit after she developed a "feminine curvy body" and began to pursue music after performing in the aforementioned burlesque shows. "I got a dance job for one of their shows and I just realized I wasn't the best dancer," Cunningham recalled to People. "I mean, I was really good, but I wasn't the best one in the company. So I told them I could sing, and I ended up getting a solo part in the next show. Eventually, I was reviewed by The New York Times and they were like, 'Where's this girl's album?'"

Cunningham is also a proud member of the LGBTQ+ community. "A lot of my music is pretty queer because I'm telling my stories and I'm queer, and I really believe in representation for anybody who's marginalized," she said, per People. "Being a queer person, I can't really help but write true stories about love with female pronouns."

Get to know some of her music below.

"All of These Birds"

Cunningham didn't initially know what this song was about while she was writing it. "It felt like a nursery rhyme until the symbolism of the birds revealed themselves to be a metaphor for anxiety and insomnia," she wrote on Twitter in a thread. "This song is for anyone who has ever been kept up at night. It's for people who have felt that they don't fit in."

"A lot of my songs involve an awakening, usually to a community or a feeling of high and acceptance," she told Wonderland of the track. "Often it's about my own coming of age and finding who I am, which runs parallel with coming to New York and finding a community of beautiful freaks who are making it work whether they have money or not."

"Stay on the Line"

"'Stay On The Line' sets a particular scene (for which I am awfully nostalgic) of two consenting individuals sneaking onto family landlines, willing to risk getting caught for the forbidden taste of closeness," Cunning explained to Out. "It's a mark of our times that only some people remember how it feels to press a landline to their ear, cupping the crackling voice on the other end.... It's about phone sex, but it's also about the poetic depths of desire and a need to connect in the modern age."

Calling all Riverdale fans! "Eve" appeared in a recent episode of The CW show, as the musician posted on Twitter. The song itself is a slow, sexy track perfect for a sizzling teen drama.

This song played over a Victoria's Secret ad, which Cunning responded on Twitter by saying, "MY LITTLE GAY HEART is a flutter."

You can hear Cunningham sing her "little gay heart" out when Trinkets hits Netflix on June 14.