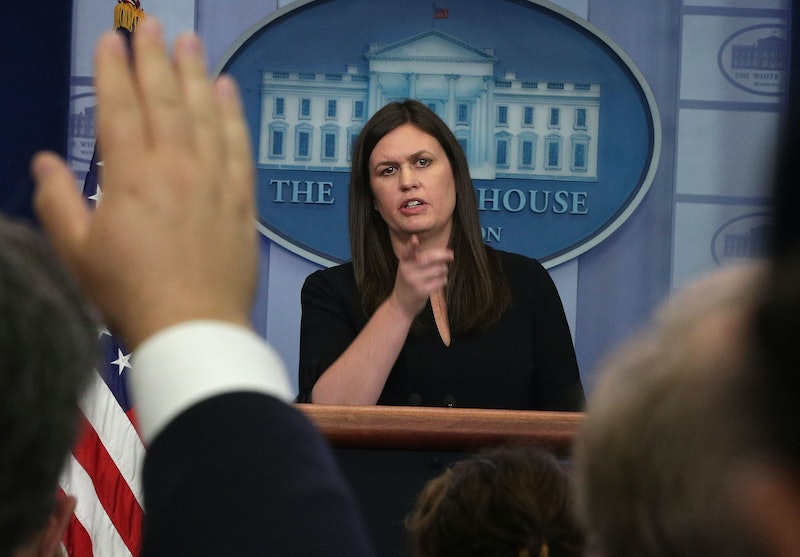 By now it's well known that Sanders — who on Friday pledged to be as "open, honest, and transparent" with the White House press corps "as humanly possible" — comes from a rather high-profile political family. It's hardly surprising that the daughter of two-time presidential hopeful and former Arkansas Governor Mike Huckabee is married to someone who also works in the political realm.

Sanders reportedly married Bryan Sanders on the U.S. Virgin Islands in 2010, according to an announcement of the nuptials published in the Arkansas Democrat-Gazette. The couple now have three young children, all of whom have, on occasion been seen romping around the White House grounds.

Although it's unclear exactly when, or how, Sanders and Bryan met, it has been reported that the couple first became close after Sanders hired Bryan, who works as a Republican strategist and pollster, to work on her father's 2008 presidential campaign. "They were both kind of cute," Sanders jokingly told the Hill of why she decided to hire Bryan and one of his colleagues after the presidential campaign they were working on for Sen. Sam Brownback folded.

Huckabee Sanders' decision appears to have paid off. Along with getting married and starting a family, the couple have also co-founded the consulting firm Second Street Strategies.

Previously Bryan has worked as a partner at the Wickers Group, a "full-service political consulting firm," managing polling, and message development while also producing TV and radio advertisements for various political clients. According to the Iowa Statesman, Bryan was identified in Campaign & Elections magazine's list of 30 "Rising Stars of American Politics" in 2011. The following year, The Washington Post named the "Pigs" ad Bryan created for Tea Party candidate Ted Yoho's 2012 Florida congressional campaign one of the four "best ads of the 2012 election." Prior to his work as a political consultant, Bryan eased into politics as a press assistant for former Kansas Sen. Sam Brownback.

Bryan is clearly a fan of his wife and her work — he retweets her and news about her often — so it seems safe to say he's likely supportive of her forthcoming promotion at the White House.