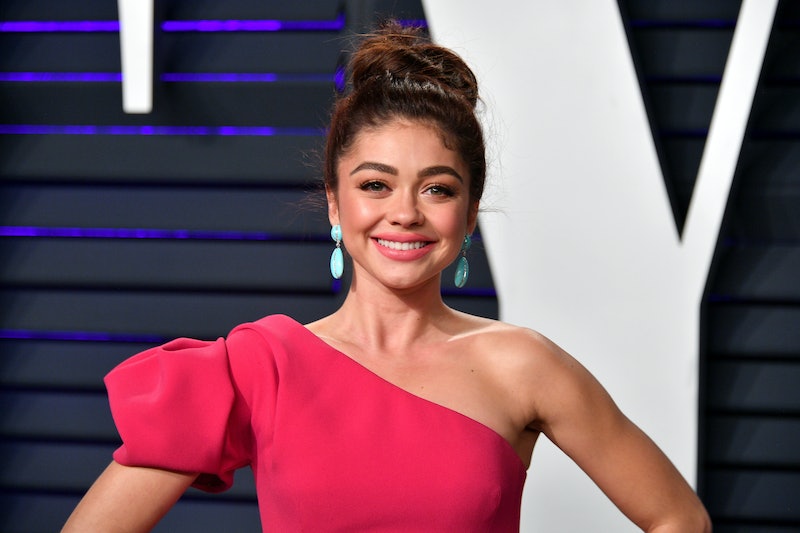 Sarah Hyland is best known for her character on Modern Family, Haley Dunphy. The character's trademark is her long, straight hair, which has become the actress's hallmark look. But Sarah Hyland's curly shag is a new deviation from that style, making her look completely different.

Hyland has changed up her hair color and length over the years, but nothing too drastic. Recently, she surprised fans by debuting a trendy shag haircut, embracing the bobbed look. Hyland unveiled the new look on her Instagram, along with the playful caption, "Shagadocious bro." The haircut consisted of jagged, thinned-out ends that created a lot of volume at the top of the crown. The bob was paired with shaggy, full bangs. Hyland got the trendsetting cut at the Los Angeles salon Nine Zero One salon, which caters to celebs like Vanessa Hudgens and Liv Tyler.

While she wore her shaggy bob straight when she first got it, Hyland is now wearing the style in curls. Which, turns out, is her natural hair texture. The actress confirmed that she has natural curls on April 9, when she responded to a tweet poking fun at her texture. A Twitter user saw a paparazzi photo of Hyland in L.A. rocking her springs, and asked if Hyland was bringing back the perm.

Hyland responded back saying, "I’d like to say this once. IT’S NOT A PERM. IT’S JUST MY HAIR."

Fans of Hyland will know that this isn't the first time that she has worn her hair naturally curly. In fact, the actress has posted her curly locks many times across social media.

On April 10, Hyland posted a throwback photo from her childhood, where she was standing with Paul Rudd and her younger brother, Ian Hyland. In the picture, the actress has short, curly hair.

A few months before, on Jan. 3, Hyland posted a photo of her beach vacation. Hyland was on a small boat facing the beach, and her lob rocked her natural curls.

A month prior to that, Hyland shared her signature long locks on Instagram, but with her natural wave. The photo was of Hyland and her boyfriend Christmas tree shopping, and she ditched the straightener for the day. The photo was so popular that Hyland was flooded with direct messages by fans, asking her how she got her curls so smooth.

The actress responded to hair care questions on Twitter, where she answered the mystery of how she kept her curls frizz-free. Hyland wrote in a tweet, "Two words. DIFFUSER. ATTACHMENT."

But the proof of her natural curls doesn't end there. On June 2017, Hyland shared photos of her locks fresh out of the shower. Hyland posted pictures of her blonde, curly hair on Instagram Stories, giving fans a peek of what her natural hair looks like.

Hyland even joked that she looked like Carrie Bradshaw from Sex and the City with her blonde, springy hair.

Even though the Modern Family actress often rocks her hair straight, Hyland clearly has very curly hair naturally. But no matter how Hyland decides to style her tresses, she looks amazing in whatever texture she chooses.