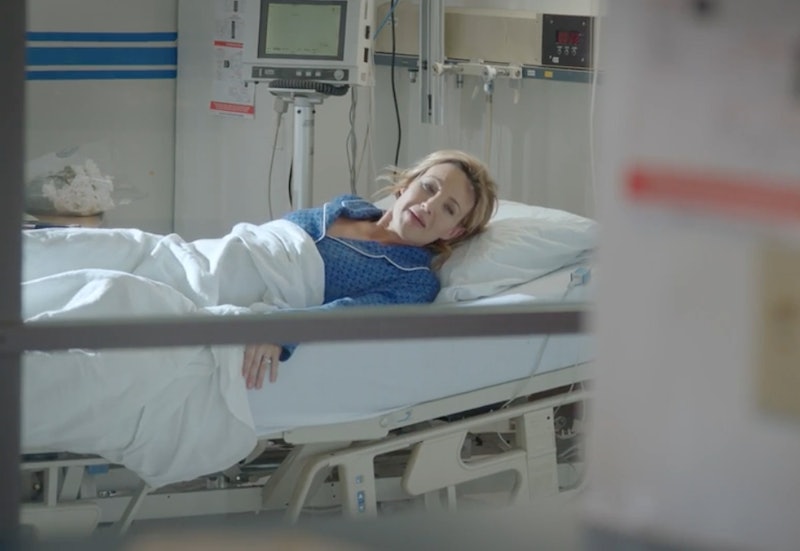 Leave it to Lifetime to follow up their cheerful Christmas programming with a "Deadly Resolutions" marathon to ring in the new year. The 2019 lineup includes old Lifetime flicks with lethal plots as well as new movies like Saving My Baby, which isn’t based on a true story but has a very familiar premise. According to Lifetime’s description, Sarah is a mom-to-be who gets into a serious car accident. She wakes up in the hospital days later and, to her horror, discovers that her baby is gone. Sarah starts to track down her child and soon discovers that this series of unfortunate events was not an accident after all. Surprise, surprise. It's a Lifetime film, so of course this baby-napping scheme will include some unbelievable plot twists and moments that will make fans scream at their televisions. Thankfully it's purely fictional, so the drama can be enjoyed with zero guilt or worry.

The Saving My Baby trailer starts off with an unexpected monologue by Sarah, who talks about her whirlwind romance with a man named Travis. As the couple strolls along the beach, she reflects on their instant attraction and claims she knew right away that he would be her husband one day. Predictably, Travis drops to one knee and proposes, but things take a dark turn as the clip jumps to the scene of the accident. Sarah's car flips over a tiny cliff and she somehow manages to fall out of it and land perfectly on her back.

She wakes up in a hospital several days later and immediately notices that she is no longer pregnant. She screams for her baby girl Lily, who is seen with Travis. Sarah vows that she will get Lily back, no matter what it takes. It's not clear if Travis and Sarah are married or even in a relationship at this point, but things are going to go sour by the end of this film. That's how Lifetime movies work — especially one included in a "Deadly Resolutions" marathon.

It will be interesting to see why Travis decided to plan this "accident." Perhaps his relationship with Sarah has ended and now he's determined to have their daughter all to himself. If so, he did a terrible job because he didn't even check to see if Sarah had actually died at the accident scene. He was likely driving the car that ran her off the road and the actual crash actually wasn't that bad. Men in Lifetime films tend to have secret identities so Travis probably seduces women and takes children for a sinister reason.

But how did he actually get the baby? It's not likely that he cut her abdomen open at the crash scene, so he must have taken Lily from the hospital. Security measures obviously don't exist in the Lifetime universe.

How will Sarah get her daughter back? What is the story behind Travis? These questions and more will be answered when Saving My Baby premieres on Friday at 8 p.m. ET.