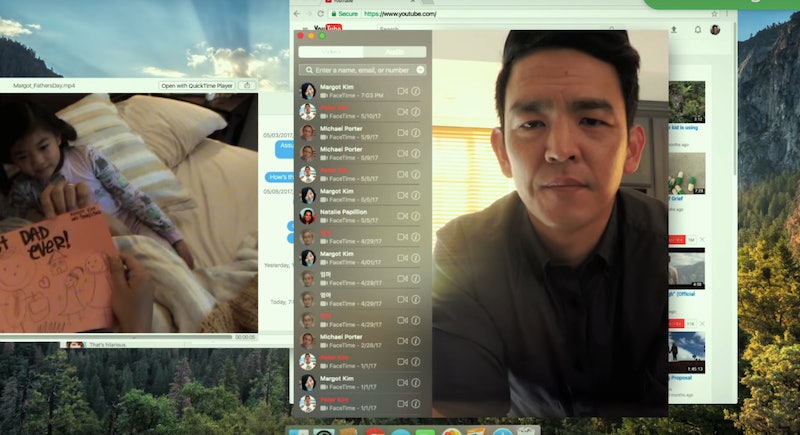 The new film Searching is sure to draw attention for telling its story through a computer screen. And while that's definitely unconventional for a movie, the story itself is one that's been told many times before — that of a parent with a missing child. But is Searching based on a true story? The idea that a father would try to find his missing teenager by going through her laptop isn't at all far-fetched.

That said, the story shown in Searching, out Aug. 24, isn't a true one. There is no real life version of John Cho's character, David Kim, who went on the search for his missing 16-year-old named Margot. For those who aren't totally familiar with the premise, Cho plays a father whose daughter goes missing, and he eventually looks through her laptop for information. He comes into contact with people she knows and goes through her documents and history in order to find clues. He also finds out a lot of shocking information about his daughter's life and realizes he barely knows her. Viewers watch the story play out on the computer screens he uses — his own computer and Margot's laptop. (The trailer below shows what this looks like.) David also involves police in the search for Margot, including a detective played by Debra Messing.

While David and Margot Kim aren't real, this premise is, of course, based in reality. There have been plenty of cases of missing persons being investigated via their computers. For instance, earlier this year a 16-year-old girl was found in Nebraska after reportedly running off with a man she met online. Police investigated her computer for clues and found chats between the two. There's also an example from this year of a 13-year-old who ran away and potential evidence for the reason why was found via her search history.

Searching is a thriller and it's not just the fact that Margot is missing and we don't know whether she'll be found that makes it suspenseful. In the trailer alone, it's eerie to see David realize that his daughter's been lying to him and doing things like transferring large amounts of money. And since it's told via the computer screen, viewers can feel like they're finding out the information along with David.

Searching premiered at Sundance in January where it won the NEXT Audience Award. At the time, Cho and director Aneesh Chaganty spoke to Collider, and Chaganty explained that because the format of the movie will be so new and different for viewers, he wanted to keep the story more traditional. "Because the visual expression of the film, because the way we tell it is so unconventional, we wanted the story to be grounded in a very classic thriller. And so all of the beats are sort of beats that you're familiar with, that you’ve seen before." Cho added that there are a lot of twists and turns, though, and that with the format, it needs those to really work.

For those who want to see if Margot is tracked down and what David finds along the way, check out Searching when it hits theaters.