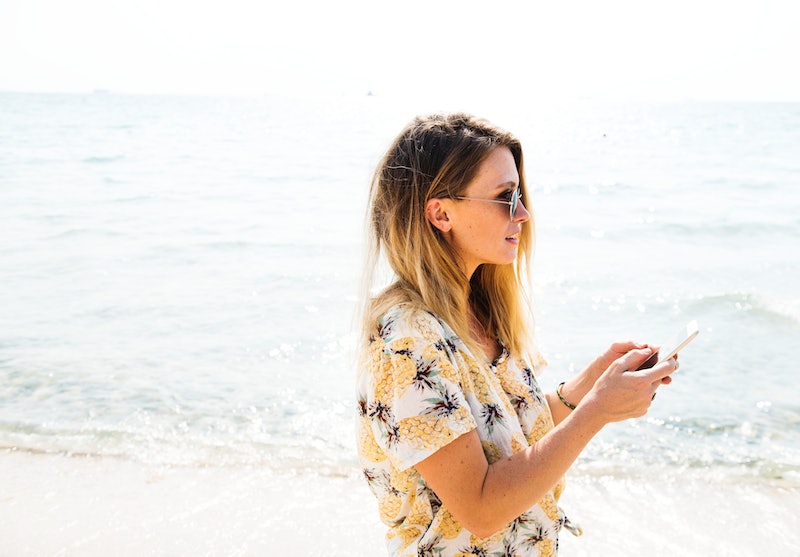 When it comes to dating apps, is double-texting a bad idea? Let's say you're on an app and you match with someone who really catches your attention. From your initial take on their profile, they're cute, they have a quirky sense of humor, and they happen to like a bunch of things you do. You think, this person could be your soul mate! Since waiting around for someone to make a move isn't your style, you message them with a perfectly crafted opener designed to get the ball rolling. But no response.

Since it's a dating app, most people you know would probably tell you to just move on, the person's clearly not interested. But for some reason, you still are. So what do you do in this situation? Should you try again or don't even bother?

"Why not?" Michelle G, matchmaker, dating coach, and CEO of MG International tells Bustle. "We live in a world where there is constant noise and get distracted easily. The dating landscape has changed and it's no longer about old school rules. If you're interested in someone and they didn't respond the first time, send them another text. If they don't respond after that—move on!"

Luckily, data scientists at Hinge has the answer. Their research team recently conducted a study that analyzed over 300,000 conversations over the span of two weeks to discover whether sending a follow-up text to an initial opening message would lead to positive results or not. Typically if someone doesn't respond to your opener within a reasonable amount of time, it's safe to assume they're probably not interested. But according to Hinge's data, that's not necessarily the case. Here's what they found: