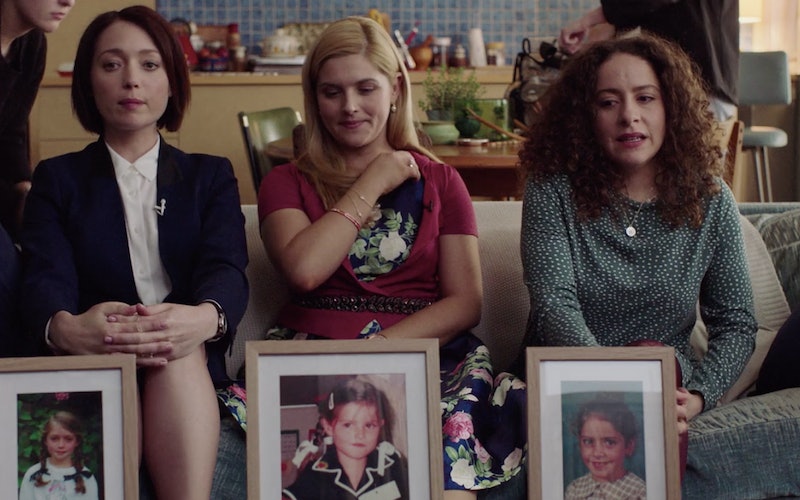 Looking for a new dramedy for your next Netflix marathon? If you are, you might find yourself pressing play on an Australian series that's hitting the streaming service this Labor Day weekend. Sisters is the story of a girl named Julia, who presumes she's an only child until her father, a Nobel prize winning reproductive scientist, makes a shocking (and pretty disturbing) confession from his deathbed: Julia is in fact, not an only child. Actually, she has more than 100 siblings that were conceived via IVP procedures for which her father used his own sperm. Is Sisters based on a true story? It may sound far-fetched, but the story's concept was actually inspired by real, equally disturbing, events.

In the early 1940s, Dr. Bertold Weisner opened a fertility clinic in London. He and his wife guaranteed their patients sperm from "above average" donors, according to ABC News. DNA tests from 18 of the people conceived at Weisner's lab later found that he was the father of 12 of them. One of Weisner's IVF offspring told ABC News that Weisner could be the biological father to 300 to 600 people.

According to The New York Times, Virginia-based doctor, Cecil B. Jacobson, was convicted in 1993 after he was found to, allegedly, have fathered up to 75 children having used his sperm to artificially inseminate patients, who were told the sperm was from anonymous donors. As recently as April, per CNN, Canadian doctor Norman Barwin was accused for similar crimes. So this sort of thing is entirely possible, and makes the show all the more realistic.

The Netflix newcomer is called Sisters because it focuses on the two (yes, only two) sisters that Julia discovers she has among dozens of brothers. So it's not based on one, singular true story, but it definitely took inspiration from the similar news headlines that have amassed over the years.

Award-winning writer and producer Imogen Banks and her Sisters colleagues Jonathan Gavin, Michael Lucas, and Benjamin Law chose to see past the disturbing nature of the story and analyze the life lesson it provides. "We went, 'This is really a story about family and what it is.' It's about nature versus nurture," she told The Sydney Morning Herald. "How your identity is constructed – and what happens when a central pillar of your identity is suddenly removed."

After Julia discovers the baffling news, instead of rejecting it, she decides to hold a family reunion-style luncheon for everyone to meet. She discovers that she already knows a few of the people when they walk through the door, which is only the beginning of the turmoil that follows.

In light of that, creator Jonathan Gavin was able to turn what would be an existential crisis for most into a comedic story that has the potential to elicit some self-reflection from everyone. At one point in the trailer for the show, Julia says, "There's a difference between being related and being family," which is a message many viewers can relate to, no matter how obscure the plot line may seem. Gavin adds in the same interview, "It's a great way to explore what family really is." He's right — every family has its own, unique (or very unique in this case) origin story.