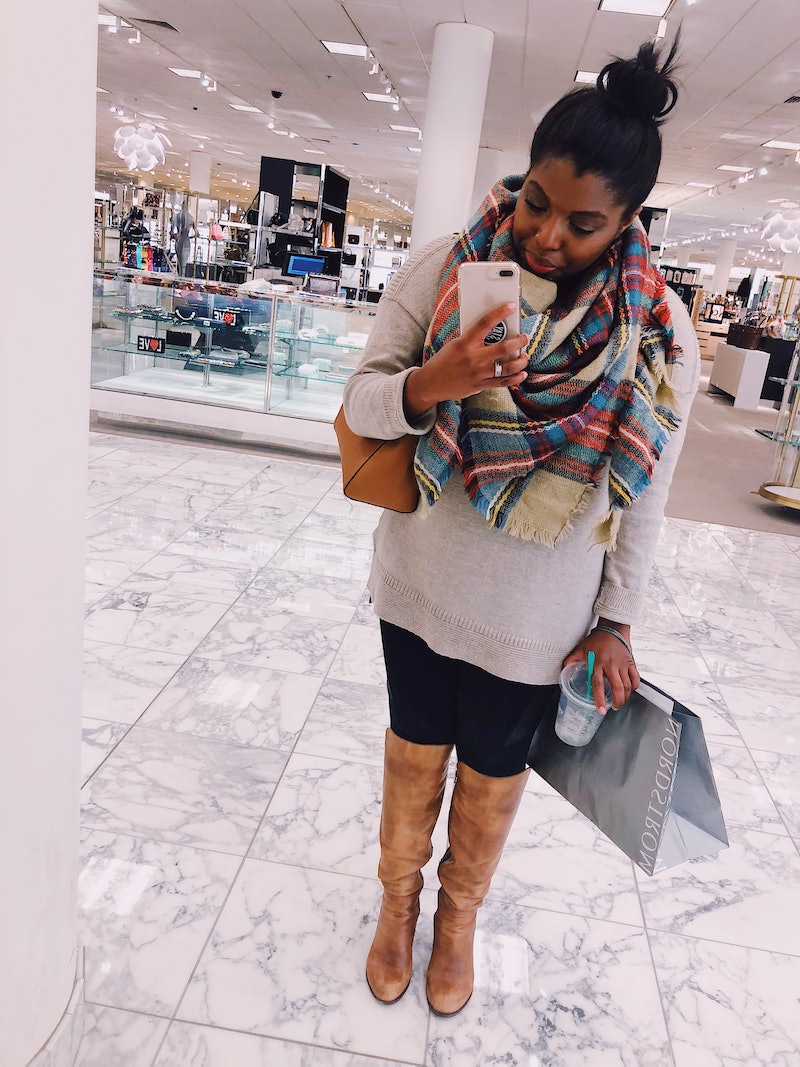 I know that I should probably use my cell phone less, but I know it in the same way that I know that I should drink more water and exfoliate more often. I am always on my phone — I'd love to say that it's work-related, but that isn't true. I struggle to put it down on dates, find myself scrolling through Twitter while I sit in church, and I can't fall asleep without it. I know! It's bad! But I've accepted it as a part of life, so when Bagby — the "world's first sleeping bag for your smartphone," according to their website — invited me to join a "Phone-Free Bedroom Challenge," I was extremely wary. The average young adult checks their phone 85 times a day, per HuffPost, but I didn't feel like I was that bad.

The idea is that you (and your significant other, if you have one) put your phones in a sleeping bag that hangs outside your bedroom. It's supposed to improve your quality of sleep and your relationship. For $12, Bagby even sends you a physical alarm clock so you don't have to rely on your phone to wake you up in the morning. I felt like I wasn't actually overly attached to my phone, so taking such drastic measures felt like overkill. Still, I love a good challenge, so I made plans to try it out. I decided I was going to do it for a week and document any notable changes.

I made it two days.

The first night without my phone was fine. My husband and I reminisced about our wedding and talked about places we wanted to visit this year as we fell asleep. The second night, I was feeling anxious about falling asleep without my phone, so I came up with a workaround: I sleepily scrolled through Instagram on the living room couch until I was too tired to focus on the screen. By the time I made it to bed, my husband had been snoring for a while.

By the next night, I'd given up completely. My husband asked me, confused, why I hadn't put my phone in its handy sleeping bag. I snapped at him that I didn't want to talk about it. I realized just how guilty I felt about only making it two days without my phone, especially when I assumed the whole thing would be a breeze.

I was faced with an awkward reality: I was actually physically uncomfortable at the thought of being away from my phone for long periods of time. I've had a cell phone since I was 11 years old and have only given it up during inpatient hospitalizations. My phone goes everywhere with me. I joked to my husband that I should kiss my phone instead of him on New Year's Eve. But suddenly, it didn't feel like a joke anymore.

I went searching for ways to make it easier to digitally detox (because, clearly, I needed it), so I got in touch with a celebrity who's become an expert on the art of unplugging. Arianna Huffington, co-founder of HuffPost and CEO of Thrive Global, just launched the Thrive App, an app that helps people put their phones down every once in a while. She tells Bustle that it's best to take small steps to unplug.

"You can start by not keeping your phone in your bedroom while you sleep, and not picking it up first thing in the morning. Instead, take even one minute to breathe and set your intention for the day," she says. "Then add some other digital-free moments in your day — go to lunch without your phone. Do family dinners with no screens. Have device-free meetings. As you notice the benefits — to your health, your productivity and your relationships — you’ll begin to add more time into your life to unplug and recharge."

I wish I could say that I had a huge revelation and immediately changed the way I view my cell phone, but I just went back to keeping it in our bedroom long before the experiment officially ended. I sleep with my phone under my pillow, and I'm still not sure that I want to make any changes. That's the hard part. I also have the excuse of working in media, which gives me a legitimate reason to check Twitter incessantly. But Huffington challenged that idea, too.

"We're been living under a collective delusion that burnout is a necessary price for success for so long that we can sometimes be pushing ourselves as much as we're being pushed by actual demands. So that means asking: are you really looking at your phone because of work, or because of boredom? Can what you're working on wait until the morning, or does that e-mail really need to be answered right now? For anyone in a high-stress environment (which is unfortunately most of us), it's especially important to set your own boundaries and take time away from your phone when work isn't actually demanding your attention."

As much as I hate failing or going back on my word, I realized that I wasn't just bothered because I wasn't successful. I felt uneasy because I pride myself in being disciplined. But my perfectionist bubble was shattered, and once I learned smartphone addiction is a legitimate medical condition, I felt like I could seriously be putting myself in harm's way. How do I handle my smartphone overuse when I have no serious desire to put my phone down?

I talked to my parents about the experiment after it concluded because they've been begging me to use my phone less since I was a teenager. My mom reminded me that I'm recovering from carpal tunnel release surgery, a condition that was partly brought on by my computer and smartphone over-usage. "Isn't that motivation enough?" she asked me. She's right. My health has been affected by my desire to always be online. And I know my relationship with my husband would likely be healthier if I made an effort to turn off my phone sometimes. I don't think I'll go off the grid anytime soon, but I am going to be more aware of how my phone affects my life. As much as I love Twitter, I'm going to try to take more breaks. I know it can't hurt.