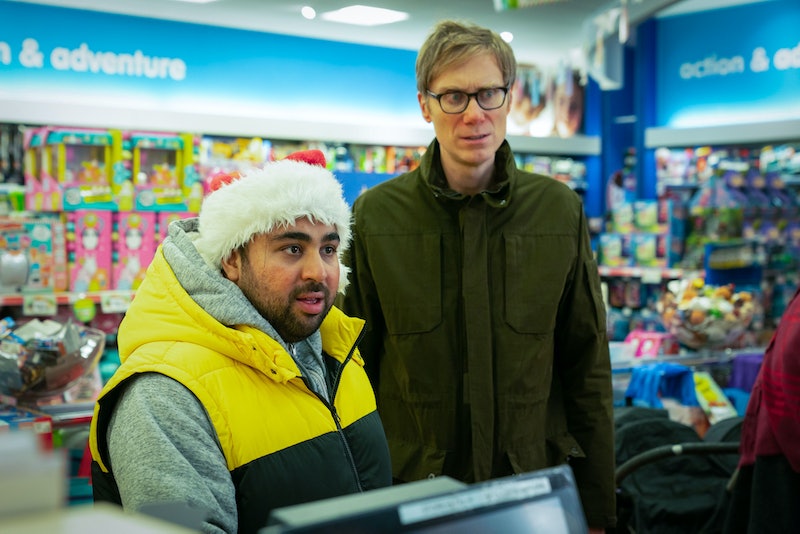 Remember the days of being blissfully unaware at how hard getting your hands on the year’s hottest toy was? Kids blissfully circling everything and anything in the family Argos catalogue, inevitably causing parents to collectively lose their minds at getting their hands on whatever was most popular that year. Andrew Bennett (Stephen Merchant) experiences this in BBC’s Click & Collect, when trying to get his hands on 2018’s must-have unicorn plush. But, is Sparklehoof the Unicorn Princess a real toy that parents will need to panic buy?

Thankfully, from what I can find online, it looks like Sparklehoof the Unicorn Princess is fictional, and is a problem that only Bennett will have to deal with. Although, it seems that there is a unicorn that kids are after this Christmas and it comes with a rather strange twist — it poops slime. According to The Telegraph, Poopsie Surprise Unicorn (yes, that is its name) is one of the most sought after gifts this year, and TBH I’d have been all over that if it were out when I was a kid. The word “poop” combined with slime and a unicorn? I see the appeal.

Regardless, Click & Collect is set to either give parents flashbacks to the days of trying to procure every Teletubbie available (my parents can attest to this, even though I was a year old and did not ask for them), or will give those with kids today some sort of knowing semblance that they are not alone in their gift buying woes. Click & Collect also shows parents how not to go about trying to get such a sought-after toy, as driving 300 miles up to Carlisle is a bit much, IMHO.

But with the help of over-friendly neighbour Dev D’Cruz (Asim Chaudhry), that’s exactly the lengths that Bennett will go to so that his six-year-old’s daughter’s Christmas isn’t ruined. If this is giving you Jingle All The Way vibes, you’re not the only one. Although it looks like this one-off comedy is going in a substantially different direction, with no fights between any Arnold Schwarzenegger or Sinbad types over who gets the last Turbo Man.

Instead, this unimaginable pair have to abandon all hope of finding Sparklehoof anywhere in London, and instead drive for over six-hours to pick up a click and collect order of the toy that D’Cruz has somehow managed to get his hands on. As the press release expertly sums up: “For Andrew, it’s a nerve-fraying nightmare; for Dev, it’s the best road trip of his life.” I think the majority of the nation will be feeling for Andrew on this occasion.

"Stephen and Asim are absolutely knockout together in a script bursting with comic incident, hilarity and heart," BBC Comedy Commissioning Controller Shane Allen said in the press release. "It's a family treat for your Christmas stocking."

With the unlikely pairing of Merchant and Chaudhry, this hour long Christmas Eve special is certainly going to be one you do not want to miss, that's for sure.