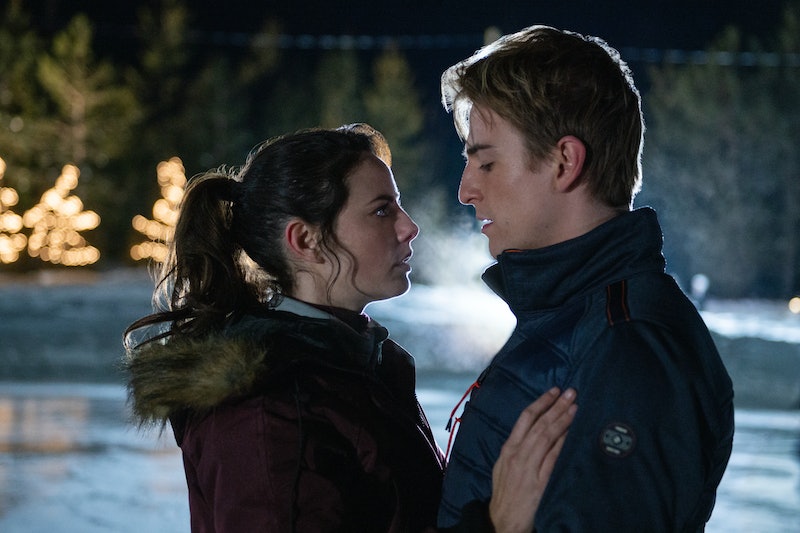 Netflix's new series Spinning Out centers around elite figure skater Kat Baker (Kaya Scodelario) who struggles to get back on the ice after suffering from a terrible fall. But even though the storyline might feel familiar, Spinning Out is not based on a true story. However, it should definitely call to mind a very specific incident in figure skating history. In fact, the show even makes a point of referencing it in the trailer.

Though the characters in Spinning Out aren't actually based on specific people or a real-life story, per se, it does link its way back to a traumatic event that took place in the world of figure skating from way back in the '90s. In the trailer, one of Kat's fellow skaters says to her, "I can whack your knee with a bat, or is that too '90s?" That remark is in reference to the infamous attack on Nancy Kerrigan that took place on Jan. 6, 1994 when a man clubbed her in the right knee, making her unable to compete in the rest of the U.S. Figure Skating Championships that year.

It was suspected by many that Kerrigan's fellow skating competitor, Tonya Harding, had a hand in the attack, given that her ex-husband Jeff Gillooly hired the man to do the horrible deed. However, Harding has long denied any knowledge of the attack and insists that she played no part in any of it.

But while Spinning Out may reference the Kerrigan-Harding incident, that doesn't mean any of these characters are based on those real-life people or events at all. The line is most likely meant to reflect just how competitive the figure skating universe can be. Much like the real-life athletes, these characters will face the intense pressure that takes place in this particular sport as they all strive to bring home the gold.

That being said, a former Olympian will actually be part of the Spinning Out cast and play a crucial role in the story. Johnny Weir will serve as Kat's rival throughout the season and do whatever it takes to beat her and her new skating partner, Justin. Whether he becomes successful in that mission is something viewers will have to tune in to see. Spinning Out isn't ripped from any actual headlines, but it's a riveting drama all the same.

More like this
Yes, The Same Valet Worked For Both The Duke Of Windsor & Mohamed Al-Fayed
By Karen Fratti
Lib & Will’s Romance In 'The Wonder' Is Very Different From The Book
By Sam Ramsden
Netflix Bumped Up The 'You' Season 4 Premiere Date — Here's What To Expect
By Bustle Editors
The 'Wednesday' Creators Are Already Discussing A Potential Season 2
By Brad Witter
Get Even More From Bustle — Sign Up For The Newsletter