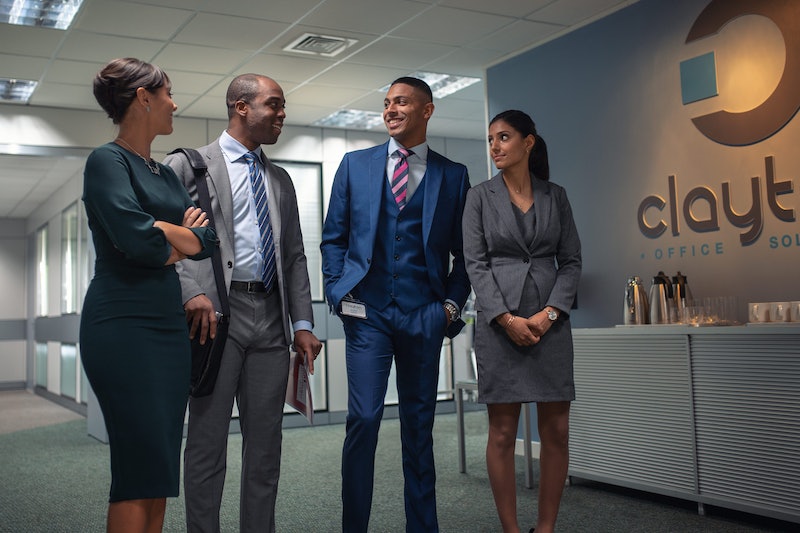 Doctor Foster was one of the most gripping shows I've seen in a long time. A killer cast and amazing storyline made for great TV. If you miss being kept on the edge of your seat then this new psychological thriller from Doctor Foster’s creator, Mike Bartlett, may do the trick. But is Sticks & Stones based on a true story? A harrowing tale of workplace bullying, stress, and conflict, the series touches on so many issues experienced by people in competitive work environments. While Bartlett’s inspiration is close to home, it may not be what you expect.

Brand new ITV series Sticks & Stones is directed by Julia Ford (who has also worked on Safe and Silent Witness) and was written by Mike Bartlett. Exploring the dark side to competition at work, Bartlett drew on a previous piece of writing to inspire the series. A representative for the show told me that Sticks & Stones “is based on one of Mike’s plays, Bull and not based on a true story.” In a review of the show back in 2015, the Guardian's Susannah Clapp:

“Bull may be short for bullshit. But also for bullying and for bullfighting. The stage is set up like a boxing ring, around which some of the audience stand, draping themselves over the ropes. Yet the dialogue is all baiting and response. Not gladiatorial combat but goading.”

Bartlett has recreated this in the storyline of Sticks and Stones.

Speaking to the Independent about the new three-part ITV series, Bartlett said:

“It’s great to find a subject with mass appeal, whether that's people having affairs or the stuff you have to deal with at work that so many of us have experienced. We all have something in us that if we are treated in the wrong way, we snap. Something in us that breaks if we are not respected, we’re bullied, or we are pushed to a point deliberately — something in all of us that becomes animalistic. And I find that fascinating.”

Clearly, in finding inspiration for Bull and, by extension, Sticks & Stones, Bartlett drew on experiences that are sadly all too common for all of us: toxicity in the workplace.

Sticks & Stones follows the story of salesman Thomas Benson (played by Ken Nwosu). As a man who relies on bonuses and polished pitches to provide for his family, Thomas often leads his team to success when it comes to attracting clients. However, as one pitch turns bad, he slowly begins to notice his colleagues turning on him. As the series goes on, it becomes clear that it isn’t all in Thomas’ head.

Bull was heralded as extremely gripping but difficult to watch at times and Sticks & Stones seems to deliver the same. With an awesome cast and a powerhouse behind the script it’ll have you right on the edge of your seat. You can watch the first episode on ITV at 9 p.m. on Dec. 16.

More like this
ITV's 'Maternal' Was Inspired By A Very Simple – & Unanswerable – Question
By Maxine Harrison
'The Last Of Us' Has Officially Been Renewed For Season 2
By Darshita Goyal
Turns Out George Clooney Is A Huge Fan Of This Classic British Game Show
By El Hunt
Rupert Grint Just Shared A *Major* Update About Ron Weasley’s Future
By El Hunt
Get The Very Best Of Bustle/UK
Sign up for Bustle UK's twice-weekly newsletter, featuring the latest must-watch TV, moving personal stories, and expert advice on the hottest viral buys.