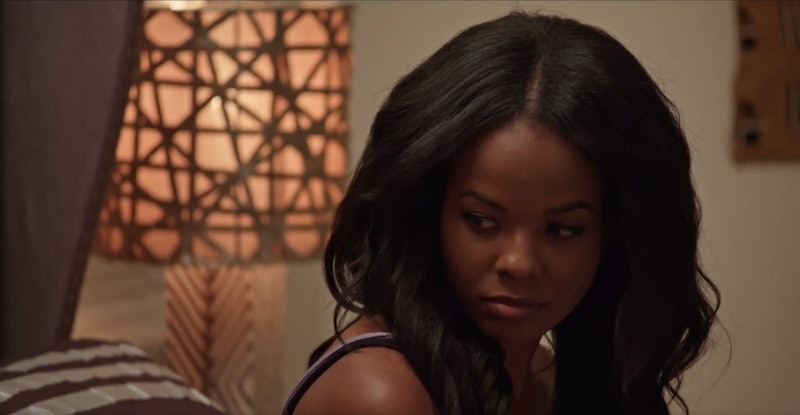 Lifetime movies can make literally anything turn into a homicidal nightmare. The network has made heart-stopping thrillers about deadly vacations, killer ex-boyfriends, internet stalkers, and terrifying students among many other bad situations. Their latest movie, Suburban Swingers Club, isn't based on a true story, but the plot will make any couple think twice about trying the swinger lifestyle.

Per Lifetime, the film follows a married couple who decide to join a swingers party in their quiet, suburban neighborhood. But things quickly go off the rails when their jealous (and murderous) neighbor decides to wreak havoc. The synopsis doesn't reveal much else, but thankfully the Suburban Swingers Club trailer gives a few more details about what could go down.

In it, Lori (Dana Davis) looks out of her bedroom window to see her chiseled and attractive neighbor doing a bunch of nothing in his front yard. Her husband Grant suggests that they head over to a local party, but he warns her that the group likes to share "intimate experiences." She's a bit shocked, but they go anyway, and once there, Lori sees the same hot neighbor. She and Grant go their separate ways for a night of passion, then resume their normal lives. Well, they try to. Apparently, Lori’s neighbor wanted more than a one-night stand and suddenly pops up in her bathroom one day. They fall into each other's arms again, but Lori isn't happy to discover that Grant has been seeing Giselle, the woman he slept with at that same party.

Lori says they shouldn't have gone to the party because it destroyed their entire lives. The end of the preview gets really complicated as Lori holds up a 3D ultrasound with tears in her eyes. Uh oh, it looks like a homicidal neighbor isn't the only problem in this movie.

As usual, there are so many questions about how this messy situation started in the first place. How in the world did Grant know about this club? It's possible that he was in an open relationship or part of a swingers club before he married Lori. Or perhaps Giselle invited him in hopes that they would get to hook up. Why did they decide to go to the party? Lori and Grant are a newly married couple and there's no indication that they weren't monogamous before this night, so it seems strange they'd want to open their relationship without discussing it first.

Also, what's up with the hot neighbor? It's assumed that he is married, but he seems to be set on having an ongoing relationship with Lori. And he's probably an established murderer because that's the Lifetime way. Finally, who is pregnant? Lori might be having a baby and not sure who the father is, or she could have found the photo among her husband’s belongings. One thing is for sure: there's a lot going on in this story.

Find out if Lori and Grant's marriage can survive when Suburban Swingers Club premieres on March 9 at 8 p.m. ET.