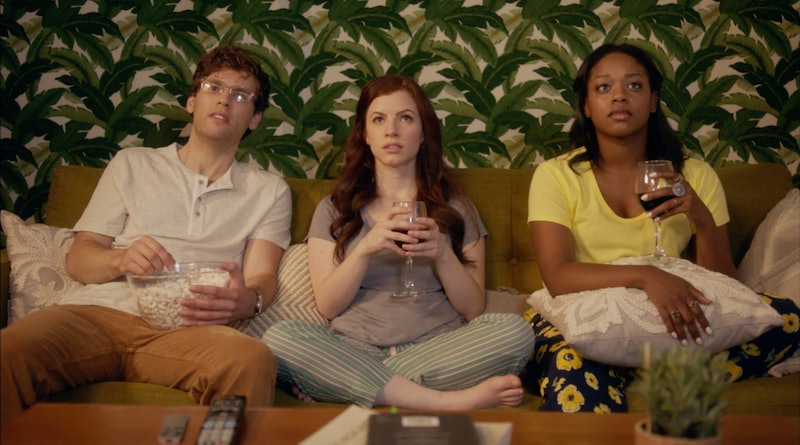 The CW's new musical comedy, I Ship It, is a fangirl's dream, following a woman who lands a job writing for a show she used to write fan fiction about. The series in question? Superstition, which isn't based one a real TV show in particular, but rather several of them.

I Ship It actually has a Harry Potter fandom origin story. Before getting redeveloped into a digital series for the CW Seed, the concept started as a short film starring Mary Kate Wiles (The Lizzie Bennet Diaries) and Joey Richter (A Very Potter Musical) as exes battling in a Wizard Rock competition — which, for those unfamiliar, involves bands performing songs about or from the POV of Harry Potter characters.

The CW Seed version was also about a nerd rock band, but the new show — airing on the CW proper — is about a made up show instead. It features the same characters, but with a slightly different story. Still, it's the same at the core.

"In every iteration of it, it's a fangirl story [but] I'm not a musician — it's the great tragedy of my life that I have no musical talent. I didn’t know that world as well," creator Yulin Kuang explained to Variety. With this iteration of the story, she's providing "a roadmap for my former self of how you go from being a fangirl to being a creator in your own right."

Fittingly, the fictional Superstition seems to be one big, loving nod to other shows beloved by the fandom community.

The title alone, Superstition, seems to be a reference to the WB's long-running hit Supernatural that has a famously intense fandom.

However, according to the inspirations Kuang cited during her Variety interview, she was inspired by growing up as a Buffy fan (as well as the spinoff Angel) in the '90s and early '00s.

There are also Easter Egg-like nods to the next generation's brooding vampire love triangle fave, TVD, according to Variety.

Superstition is about witches, not vampires, so naturally, Kuang looked to Charmed.

You may not remember this fandom, but any passers-by on Tumblr circa 2011 could tell you all about it. Kuang didn't list Teen Wolf as an inspiration, but with its magical world and romantic angst, it fits the "Superstition" vibe pretty well. Hell, you might even see a little bit of as Wynonna Earp, Roswell, and Shadowhunters (which has its own fan fiction origin story) in Superstition.

Of course, as Kuang wrote in a 2016 Tumblr post, I Ship It is based on her own experiences. "The main journey I wanted to show with Ella was how fandom helped me find my way to being a creator," Kuang said. "Fandom is a comfortable playground for a lot of creators — it's less pressure and more fun and a place to experiment and slowly grow your own creative voice while standing on the shoulders of giants."

But surely, a lot of fans will see themselves in it and appreciate her homage to the culture.