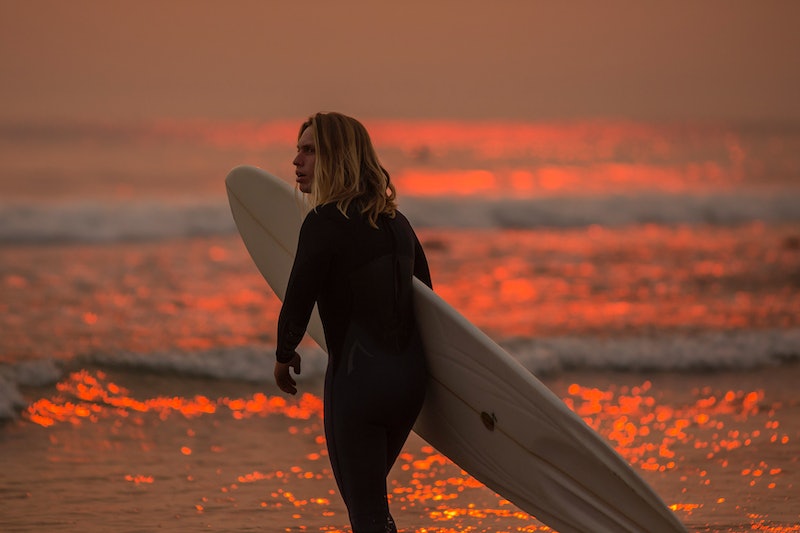 We all know that drinking ocean water is a sure fast way to dehydrate yourself and end up with a bout of indigestion due to its salt levels. But what's maybe been less obvious about the effects of drinking sea water is that, according to a new study, there are strains of antibiotic-resistant bacteria lurking in it. So, frequent consumption could lead to much graver side effects — like your body becoming immune to antibiotics that are commonly prescribed for minor ailments. Researchers from the University of Exeter produced a study that was recently published in the journal Environment International, and that concluded swallowing ocean water can be dangerous when done consistently, as it puts humans at risk of exposure to strains of E. coli that cannot be treated by conventional antibiotics. People they cite as being at a high risk for swallowing ocean water in high amounts? Surfers and bodyboarders.

It's a surprising and important discovery that will hopefully fill in some of the many gaps in scientist's understanding of the relationship between people, animals, environments, and the spread of bacteria. But before you swear off 70 percent of the Earth's surface, there are a few things you should take into consideration when reacting to the results of this study.

First of all, the waters that were tested in this study are along the coast of the U.K. Second of all, the amount of worrisome bacteria that can be consumed through extended periods in the ocean is not necessarily affecting people's health as much as it is affecting science's understanding of antibiotic resistance.

Scientists involved in the study, reportedly, are curious about the connection between the amount of time spent in an area in relation to the level of antibiotic resistance. The commonality of antimicrobials used in medicine and agriculture has increased over the years, and according to the study, all of these things can end up in the ocean. Between farms, runoff and waste-water treatment practices, it's likely that antimicrobials are being ushered out to sea, creating a dangerous environment for people engaging in activities that often lead to the unintentional swallowing of sea water.

Quite literally, some scientists are concerned that some people might be unknowingly exposed to more antibiotics due to their environment than people who are actively taking antibiotics for an infection. Surfing and bodyboarding, according to this study, lead to the largest amount of sea water consumption. That said, the study also leaves room for natural occurring strains of resistant bacteria to also be a culprit.

To complete the study, the gut bacteria 273 people was examined. Half of the people were regular U.K. costal surfers, and the other half were not. The results showed that nine percent of the surfers carried E. coli that was resistant to the commonly used antibiotic, cefotaxime, while only three percent of the non-surfers showed the same results. But before you freak out, consider the size of the group sampled: this is a small study. It's not meant to scare you away from the waters across the pond, it's merely an early discovery in what will surely be a long-lasting, vastly-expanding study that will hopefully one day help scientists to understand why we're becoming more resistant to antibiotics, and how to stop it.

In response to this study, Davis Smith, the science and policy officer at campaign group Surfers Against Sewage, suggested that people in the U.K. should check the Safer Seas Service (if you live in the U.K. just download the app so you can check it on the reg) before swimming in the sea, just to avoid any pollution incidents and to stay informed of the health risks in the water. And if you're a coastal U.K. surfer and you're worried about your health, just check in with your general practitioner.