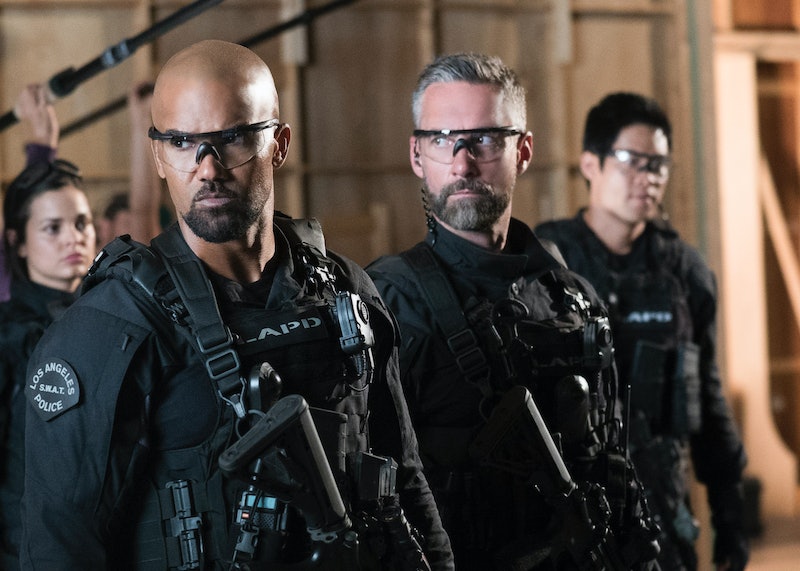 Good news Criminal Minds fans. If you missed seeing Shemar Moore on television, then you're in luck. The actor is returning to the small screen this fall, but this time around he's playing a S.W.A.T. sergeant in the new Los Angeles-set series S.W.A.T. Premiering on CBS on Thursday, Nov. 2 at 10 p.m. And although, S.W.A.T is not a true story the new show is based on a film of the same name starring Colin Farrell and Samuel L. Jackson, which itself was based on a 1975 television series.

And, Moore promised that you're getting a totally updated version of the action-packed drama. "Same name. Same font. Same theme song, but other than those similarities, that's it," he told TV Guide. "This is S.W.A.T. 2017. It's a new interpretation, real life today. Thrill ride that's going to make you go, 'Whoa! That was fun and it felt real.'"

Centered around a former marine turned officer of the law, S.W.A.T. follows Daniel “Hondo” Harrelson, who leads a police unit in Los Angeles. But just because Moore's playing a law enforcement professional again, don't expect the same kind of performance as on Criminal Minds. According to the Moore, Harrelson isn't your average cop. Instead he's “Derek Morgan on steroids” — referring to the fan-favorite FBI agent he played on Criminal Minds for 11 seasons in an interview with The New York Post.

“I gained 10 to 12 pounds for this role … I changed my diet and hired a friend who cooked for me,” Moore told the Post. “I ate five meals a day ... I need the physicality and the presence [for the role] — when I met the men of the LA and San Diego S.W.A.T. teams, strength was a big part of what they do.”

There's already so much tension today surrounding the "Black Lives Matter" movement and police brutality, and this tension is amped up even more in the first episode. The pilot centers around an innocent, unarmed young black boy being shot and killed by a police officer in Hondo’s old neighborhood. As a person of color and a S.W.A.T. officer, Hondo is a character who's supposed to walk that fine line between Black Lives Matter and the line of duty, and to offer insight into the thought process of both sides — which is no small feat for a primetime show. But, its CBS' intention to explore these topics. The synopsis for the series reads in part:

"Torn between loyalty to where he was raised and allegiance to his brothers in blue, former Marine Daniel "Hondo" Harrelson has everything it takes to be an excellent leader and bridge the divide between his two worlds."

According to Moore, if fans are willing and open-minded to the stories S.W.A.T. tells and to the message it's sharing, he believes the show can “bridge the gap" of understanding of distrust. "You may not agree with the content of the messages that we put out there, but I think they'll make you think," Moore said during the 2017 summer TV Critics' Association press tour. Are we going to fix what's going on between [the men in] blue and civilians? I don't know if we'll fix it, but maybe we'll create some understanding, some compassion, some patience."

You can find out for yourself if the show lives up to that promise when it airs on CBS Thursday, Nov. 2 at 10 p.m.