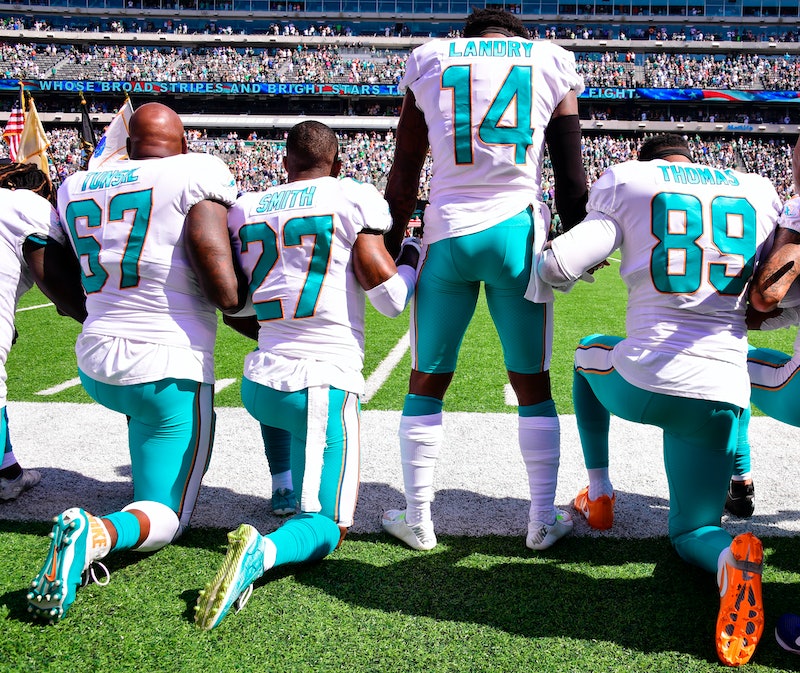 Athletes across the country joined together to protest this weekend to challenge assertions of disloyalty to their country. While many Americans interpret the act of kneeling during the national anthem disrespectful to the flag, this nationwide protest isn't about the stars and stripes at all. "Take A Knee" is not a flag protest, it's a call to live up to the values the American flag was created to represent.

Former San Fransisco 49ers player Colin Kaepernick shocked the world during an NFL preseason game in August 2016 by declining to stand for the national anthem. "I am not going to stand up to show pride in a flag for a country that oppresses black people and people of color," Kaepernick told NFL.com regarding his decision to protest. "To me, this is bigger than football and it would be selfish on my part to look the other way."

Kaepernick's peaceful protest sparked ire for many, but it also lit a fire within the sporting community that has never been seen in this concentration or intensity. After Donald Trump tweeted condemnation of Kaepernick last week, at least some players on every NFL team that played Sept. 23 and 24 participated in a form of protest. Several more teams will play Monday and Thursday night, when the trend will likely continue.

Calling these athletes' actions a flag protest inherently undermines any supportive argument for their demonstration, because the American flag has become such an untouchable symbol through generations of hegemony. For decades, those most privileged in American society taught and have been taught that the flag represents all of the things that make the United States great. The flag inspires courage, patriotism, and motivation to them — it's the physical embodiment of the American Dream.

But the reason that view has become so solidified, even amongst some of the people who suffer from the effects of systemic racism, is because there were few to push back against the predominant rhetoric. The voices of marginalized Americans have historically been so excluded from the public domain that few were able to challenge the traditional interpretation of the flag until recently. Black and brown Americans, poor and disabled Americans, female and LGBTQ+ Americans have always known that the American Dream wasn't originally intended to include them.

What these players leading the Take A Knee movement are really doing is trying to balance out that hegemony — they're trying to use their power and platform to finally let the world know how they have always seen the flag. Kneeling is not a protest of what the flag means per se, but an acknowledgement that Americans have more than one perspective on it. It really shouldn't be that shocking considering how diverse this country is.

Black and brown people attempting to take ownership of a symbol that's just as rightfully theirs as any other citizen is a scary thought for many white Americans. Many feel keep down (or not so deep down) that incorporating black and brown history erases their own. In some ways, it does. After a year of these protests, the American flag is not the same symbol that it once was. Overall, as these athletes shine a light on this country's continuing racial injustices, the meaning of the flag is slowly shifting. White Americans may no longer find the same comfort in the flag that they once did now that people of color are speaking out. But they will gain a new understanding, compassion, and kinship for their fellow Americans, which is so much more valuable than a piece of fabric.

The entire premise that kneeling is disrespectful is somewhat flawed too. Personally, I grew up in the Catholic Church, and genuflection is reserved for the most holy parts of Mass to remember Jesus' sacrifice on the cross. In fact, the first time I heard about Kaepernick's kneeling, I thought he was doing it as a special tribute, not even a protest. Kneeling signifies humility and service — it is a lowering of your own self and ego for the promotion of a belief. If these athletes want to express that belief, if that's what the anthem means to them, no other American has the right to define it for them.

But if you think about it, taking the knee is a special tribute. The American flag, particularly in the context of sports, has somehow only come to represent military members. Kneeling makes the symbol more inclusive by acknowledging that there are hard working Americans fighting battles against racism at home every day. Many players who take the knee respect the flag itself, service members' sacrifice, and the equally valid and valuable non-military Americans whose lives are negatively affected every day by systemic racism.

Society is increasingly founded on symbolism as innovation creates more interaction in non-real spaces. From emojis to GIFs to logos to flags, people define themselves by the symbols they stand by.

The obvious problem there is that symbols are naturally subjective. No two people will ever have the exact same relationship with the American flag or national anthem. It's up to everyone as Americans to respect each person's individual relationship, meet them where they are, and work together so everyone can feel proud to stand during the national anthem.

More like this
UK Black Pride 2022 Just Broke A Major Record
By Sam Ramsden
'The Capture' Is Finally Back – & S2 Looks Tense AF
By Sophie McEvoy and El Hunt
The Lionesses Are Calling For Equal Access To Football In Schools
By Sophie McEvoy
On TikTok, #SeñoraEra Shows Latinx Users Becoming Their Mothers
By Natalia Perez-Gonzalez
Get Even More From Bustle — Sign Up For The Newsletter