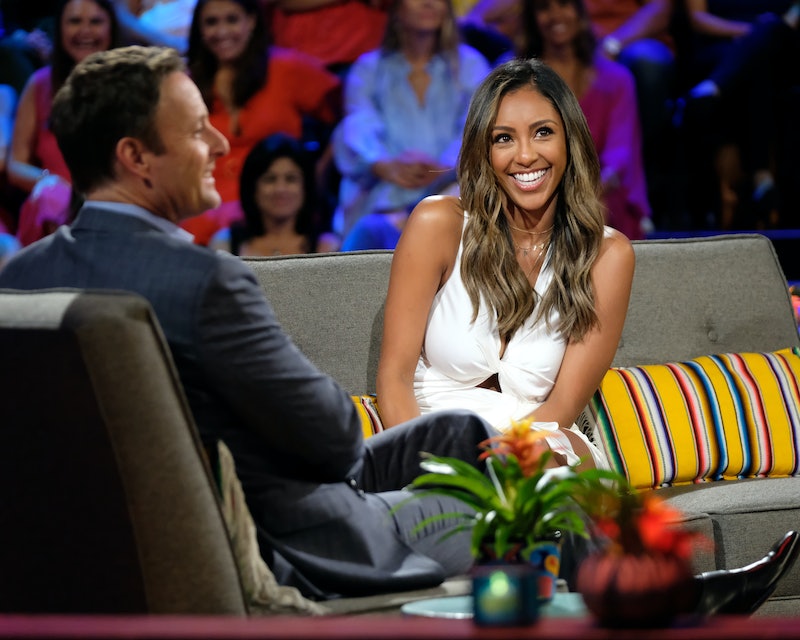 The relationship that developed between Tayshia Adams and John Paul Jones wasn't something anyone expected, and yet they came to be one of the most enjoyable (and adorable) couple to watch on Bachelor in Paradise. That's why their breakup last week felt particularly jarring given how happy they seemed together. However, this ship may not have sunk just yet. Those wondering if Tayshia is dating anyone after BiP should be pleased to hear that her romance with JPJ may not be entirely over with just yet.

Granted, neither Tayshia nor JPJ have confirmed that they've gotten back together, so until that happens this is all just pure speculation. That being said, their various interactions on social media indicate that they are — at the very least — still on friendly terms with one another. Whether that's simply a product of the fun times they shared together this summer or a clue about their current relationship status is anyone's guess at this point. But it does bode well for the possibility that their love story was rekindled post-Paradise.

In fact, Betches reported back in August that Tayshia had posted an Instagram photo of herself on a boat that looks suspiciously like the one owned by John Paul Jones. When asked at the time by one of her followers if the boat pictured belonged to JPJ, Tayshia dodged the question stating, "I live in Newport Beach remember!? Tons of boats here!" That all sounds plausible enough until you take into account that she later deleted the post altogether. Hmmm...

Even Tayshia's goodbye message to Paradise felt a little cryptic to some fans, mainly because she doesn't make it clear if she ended up staying single at the end of all of this or wound up finding love after all. She only states that her journey may not make sense to everyone. She wrote:

"Dear Me, You’ve been through a lot. I know it’s hard but I’m so proud of who you are. You are strong, brave, smart, and you were given the gift of a beautiful heart. So keep going strong and try not to stray. Not everyone will understand your journey. That’s fine. It’s not theirs to make sense of, it’s yours."

But regardless of how you choose to interpret the post, it's the finale promo for the BiP reunion special that offers up the biggest clue that Tayshia isn't as single as she's leading fans to believe. In the footage, JPJ is shown getting down on one knee in front of Tayshia, who looks shocked but not necessarily unhappy with what is taking place. That doesn't mean they end up engaged (these promos tend to be pretty misleading most of the time), but maybe he's proposing the idea of the two of them getting back together and just making a big romantic gesture for it. (It is kind of his thing, after all.)

None of this is concrete proof that Tayshia is officially off the market and back together with the Prom King of Paradise, but it's enough to give you hope that these two former love birds found their way back to one another once the cameras stopped rolling.

More like this
'Bachelor' Fans Think Rachel & Clayton Are Dating After This TikTok
By Grace Wehniainen
This 'Bachelor' Contestant Got Back With Her Bachelor Nation Boyfriend After Going Home
By Grace Wehniainen
All The Clues Zach & Christina Are Together After 'The Bachelor'
By Grace Wehniainen
Zach Addressed His "Boring Bachelor Energy" After His Group Date With Latto
By Grace Wehniainen
Get Even More From Bustle — Sign Up For The Newsletter
From hair trends to relationship advice, our daily newsletter has everything you need to sound like a person who’s on TikTok, even if you aren’t.