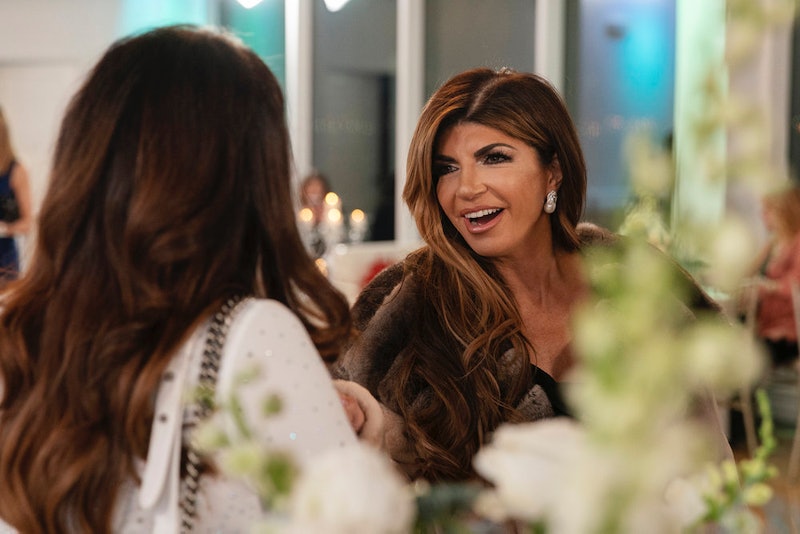 Long-distance relationships are difficult under the best of circumstances, but right now, Teresa and Joe Giudice are going through the unimaginable. He is currently staying in Italy while waiting to hear if he will be deported or not following his prison sentence. While Teresa's stated that she's been faithful to Joe while he's been away, the couple's recent interview with Andy Cohen revealed that Joe thinks Teresa has been dating while he's been away.

According to People, Teresa and Joe were convicted of mail, wire, and bankruptcy fraud in 2014 and sentenced to 15 months and 41 months in prison, respectively. Teresa served her time first in 2015, and she was released early for good behavior shortly before Christmas of that year, per the Daily Mail. Joe turned himself into federal custody, as reported by E! in March 2016, and finished his time in March 2019.

But because Joe is actually not an American citizen — he was born in Italy and came with his parents to the United States when he was a child — he might be deported. Reality Blurb reports that Joe was moved to ICE custody in March 2019, and in October 2019, he was granted permission to stay in Italy while his deportation proceedings play out in the American courts. Currently, he's appealing the deportation on the grounds that he's never lived in Italy and his family is here. The decision on the case is still pending.

Because Joe is in Italy and Teresa is in New Jersey with the kids, Joe and Teresa haven't had much of a relationship in the past four years or so. On The Real Housewives of New Jersey Special Event: Joe and Teresa Unlocked, Joe said that he didn't believe Teresa had been faithful to him during his absence. As Cohen brought up during the special, Teresa had recently been photographed with 26-year-old Blake Schreck, also of New Jersey and pictures published in Us Weekly showed the two holding hands during a weekend in Miami. On the Bravo special, Teresa said that Schreck was just helping her to her car because she was in heels and that he was just a friend.

In an interview with Page Six, Teresa's lawyer, James Leonard Jr. corroborated Teresa's account, saying, "This is a story about someone helping a woman who had some wine and was wearing high heels to her car... There is no cheating, no divorce, no scandal and no story.”

Teresa also insisted during the special that she had always been faithful to Joe, but she wasn't convinced Joe had been. He's been photographed with a lot of women, she told Andy Cohen, and flashbacks to prior seasons showed Joe reportedly speaking to another woman on the phone, calling Teresa his "b*tch wife."

Still, back on the Season 8 Real Housewives Of New Jersey reunion, Teresa seemed open to the idea of moving to Italy should Joe be deported. In October 2018, Teresa told Entertainment Tonight that the family was going to "fight" the deportation. Things changed, though, at the Real Housewives Of New Jersey Season 9 reunion in early 2019, though, because when asked what will happen if Joe is deported, Teresa said that she and her husband would probably "go [their] separate ways." “You know, I want somebody with me every day. I know exactly what happens," she said. "You know, I’m sure he’ll be with other women. It happens. We do the long-distance thing, it’s not going to work. I’d be like, ‘Bye, bye.’”

While Teresa insists that she hasn't been dating and that she's been faithful to Joe the entire time he's been in prison, ICE custody, and Italy, it seems like it's only a matter of time before she starts dating — her tune has clearly changed regarding staying with Joe should be be deported, and at this point, the fate of their relationship seems like it's in the hands of the courts.