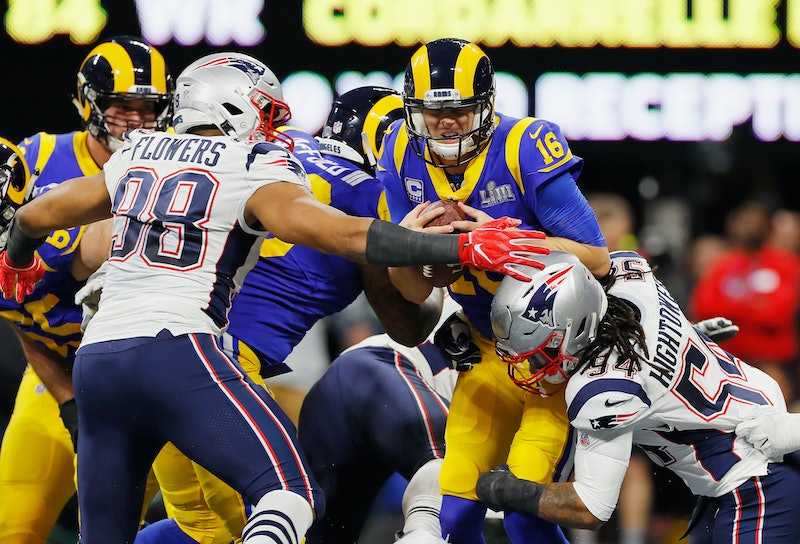 Sunday's big game began slowly. By halftime, the score was only 3-0, with the New England Patriots just barely on top. With such an uneventful start, you might have been asking yourself whether or not the 2019 Super Bowl is the lowest scoring ever.

At halftime, the score was 3-0, with the Patriots leading over the Los Angeles Rams. The only other Super Bowl to have such a low score at that point in the game took place in 1975, according to Boston.com. By halftime that year, the score was only 2-0, with the Pittsburgh Steelers just barely ahead of their opponents, the Minnesota Vikings. Rarely does the Super Bowl progress so slowly in its first half.

So while the first half of the 2019 Super Bowl was not record-breaking, it stands among the slowest starting Super Bowls in history. And the slow start evolved into a slow game, too — and it did end up making history as the lowest scoring Super Bowl ever, with a final score of 13-3 for a total of 16 points between the two teams.

Before this match-up, the lowest scoring Super Bowl game in NFL history took place in 1973. That game, between the Miami Dolphins and the Washington Redskins, ended 14-7 for a total of 21 points, with the Dolphins ultimately taking home the win. The next-lowest scoring Super Bowl game after that took was actually a couple years later, in 1975 — the same game between the Steelers and the Vikings that made history for the lowest score in the first half. The final score there was 16-6, for a total of 22 points. And next on the list was the 1969 Super Bowl, when the New York Jets beat the Baltimore Colts 16-7, for a total of 23 points.

The majority of the low-scoring Super Bowl games took place within the first decade of the NFL championship's existence. As Sports Illustrated pointed out, eight of the first 10 Super Bowls were ranked among the lowest scoring games ever.

Many football fans weren't especially jazzed about the historic nature of Super Bowl 2019 having the least points ever scored. Some Twitter accusers joked that the NFL 100 commercial — which featured 44 retired and current NFL players tackling each other and breaking tables — was more exciting than the game itself. The ad kicks off a celebration of the NFL's upcoming 100th season.

Whether Super Bowl 53 was the "worst" scoring Super Bowl in history, however, is up for debate. Some people define worst by how badly the winning team swept the floor with the losing team. In 1990, the San Francisco 49ers beat the Denver Broncos with a score of 55-10, making it the most lopsided game in Super Bowl history.

But at least that game saw some action. In the 2019 match, two field goals had the score in the single digits until the Patriots finally nabbed a touchdown in the fourth quarter — the only touchdown of the entire game.