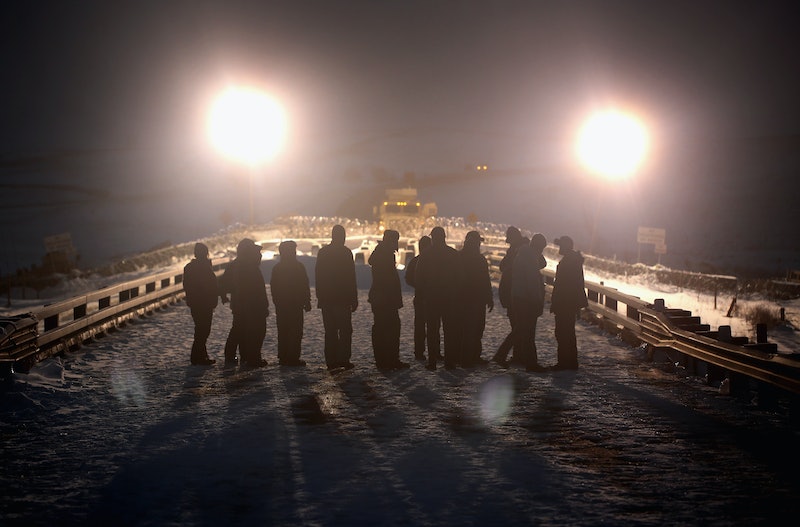 After months and months of powerful protest, civil disobedience, and the weathering of hostile authorities and bitter cold, the Native American activists and their allies at Standing Rock were successful late last year when then-President Barack Obama scuttled the Dakota Access Pipeline project. But now, it's back on, having been approved in an executive order by President Donald Trump. If you're involved in progressive activist circles, there's a good chance you already know why the DAPL is so controversial. But if not, this video about DAPL might help clear up any confusions.

It was produced by Fusion, and it helps shine a light one of the biggest, most glaring issues not just with the DAPL, but with oil pipelines in general: They're a safety risk, and when something goes wrong, it can become a big environmental hazard in a hurry. In 2016 alone, as the video states, oil pipeline accidents caused multiple injuries and even deaths, and that's without even addressing their environmental impact.

In short, this is why the DAPL protesters refer to themselves as "water protectors." It's about protecting the land and the water from contamination by way of oil and other toxic chemicals. Regardless of where you stand on the need to reduce fossil fuel emissions ― and it's safe to say Trump doesn't much feel that need, having once tweeted that climate change is a Chinese hoax ― it shouldn't be hard to understand and empathize with natives fearful for the security and habitability of their lands.

Of course, there are non-environmental reasons to oppose DAPL as well, or at the very least, to oppose it in its current form. Namely, the fact that it's been planned to run over tribal lands, a violation of the sovereignty (as well as basic respect for native populations) that the Standing Rock Sioux tribe should reasonably expect to be recognized by the U.S. government.

Unfortunately for the tribe, and for the countless people who rallied to their side throughout the months of protest, it now seems as though this whole fracas is going to start up again. While it's not entirely clear what Hillary Clinton would've done on DAPL if she'd won the presidency, it's altogether clear what Trump has planned ― as White House Press Secretary Sean Spicer said during the second press conference of his young tenure, the new president is eager to "maximize our use of natural resources to America's benefit."

In other words, if you're the kind of person who wanted to support the anti-DAPL movement but didn't get the chance last year, you might have another opportunity in the weeks and months to come. The Standing Rock Sioux tribe, for it's part, have announced that they intend to pursue legal action to keep the project from moving forward.