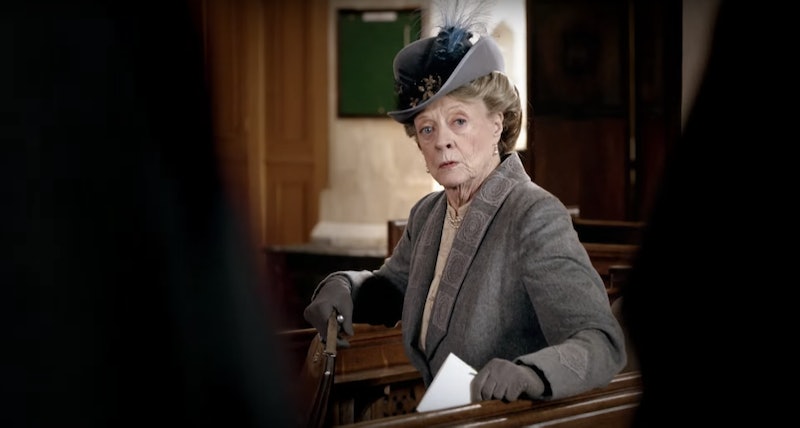 Get out the tea sets and your best 1920s garb, because it's time to celebrate the fact that the Downton Abbey movie is reportedly happening. Everyone's favorite stuffy English family and their household servants will most likely be returning for the film, according to Women's Wear Daily, who was one the first outlets to break the news on Friday. After six glorious seasons, a Downton Abbey movie may actually provide the closure that longtime fans of the series have been jonesin' for, especially where the futures of main characters like Lady Mary and Lady Edith are concerned.

According to WWD, rumors have been circulating as recently as a few months ago that the movie was a possibility. Now, it would appear that the film has been confirmed. The film's script will be written by none other than Downton's creator and writer, Julian Fellowes. WWD's report included an interesting note that Fellowes may have been so hopeful about a Downton movie that he wrote out a script in advance. Color me doubly curious to see how the renowned English screenwriter has been shaping the Downton saga in the wake of its successful TV run. On a final and most important note, U.K. outlet The Sun reports that filming on the Downton movie will begin in September of this year. That's so close, guys!

Back in August 2016 in an interview with The Telegraph, Michelle Dockery discussed the Downton movie rumors with excitement. "I think there is potential for a film," she commented. "That is something I would wholeheartedly consider, so we will see. It may not be over yet." It looks like Dockery — and Downton fans everywhere — will have this particular wish fulfilled.

For six seasons, Downton Abbey was the period drama that held a special place in fans' hearts. Combining the best of British costume drama with its wonderful cast and deliciously soapy plots, the show was always a must-watch; I have no doubts that the movie will be just as much of a must-watch, too.

More like this
Letitia Wright's Aisha Encourages A Vital Conversation Around Immigration
By Maxine Harrison
You Definitely Know The Voice Of Shuri's AI In 'Black Panther: Wakanda Forever'
By Brad Witter
This James Bond Event At Abbey Road Studios Was A 007 Fan's Dream
By Samantha Rollins
The 'Love Actually' Reunion Is Missing A Major Player
By Bustle UK
Get Even More From Bustle — Sign Up For The Newsletter