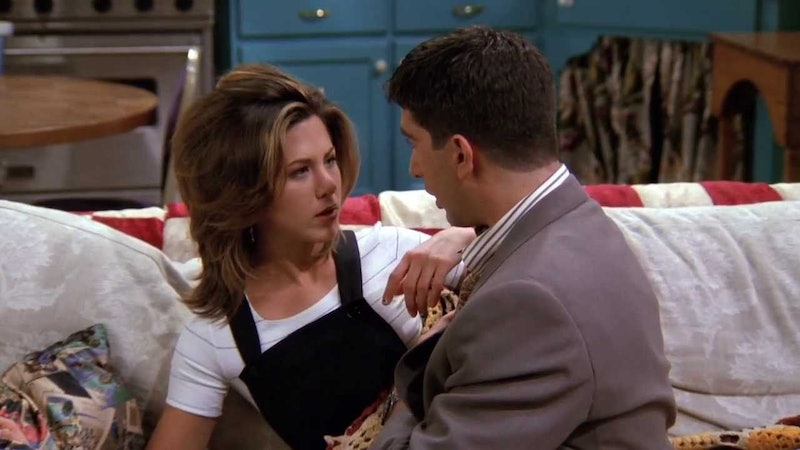 Ever complained that you've been friend zoned? Or, more likely, ever heard that you're friend zoning a guy who likes you? If so, let's hope that it never happens again — because the concept has got to go. The friend zone isn't real — except as a sexist idea.

Let's start with where it came from. It was Joey Tribbiani of Friends, that great philosopher of love, who used the term to describe Ross' situation with Rachel. This was the first season, so Rachel had just joined the group, and Ross felt his youthful crush on his sister's friend reignite. But according to Joey, he had taken too long to make a move — and that put him right in the friend zone.

If you look at it from Rachel's perspective, however, things look a bit different. Ross' hair had basically gone from bad to worse, he was consistently awkward around her, and they didn't seem to have much in common. Sure, I was all for Ross and Rachel eventually, but this was Rachel at her most vapid and Ross at his least desirable. What did he have to offer her, besides a couple months of being nice? No wonder she chose the mysterious Italian, leaving Ross in the so-called friend zone.

The friend zone, then, was just Joey and Ross' excuse for Rachel not being into Ross. Instead of acknowledging any of the things that could have been putting her off, it throws the fault onto either Rachel herself, or timing. Imagine that — she thought that a guy being nice to her when she was in a tough situation wanted to be her friend. If only he had asked her out a few weeks before, she would have been ripe for the taking!

The concept of the friend zone basically takes women's agency out of the picture entirely by making the relationship transactional. If a guy is nice to a woman, the friend zone concept says, then that should be enough to get him into her pants. If the guy has done all these nice things for her and she's still ignoring him as a romantic partner, she's the one deserving scorn and ridicule — even though he's the one who was being nice to her with the purpose of getting her to sleep with him. These are the unspoken underpinnings of the friend zone, and they're exactly why it's got to go.

The friend zone masquerades as a gender-neutral concept, but in reality it's far more common for a man to complain about having been friend zoned than for a woman to do the same. It therefore perpetuates a number of sexist myths about the nature of relationships between men and women — that men are somehow entitled to be with the women of their choice just for being nice, for example, or that an actual platonic friendship between a man and a woman is somehow a failure instead of a reward in itself. Or, even worse — that an actual friendship between a man and a woman isn't even possible, because the man was just acting like a friend to the woman because he wanted to get with her.

A woman always has the right to say no to a man's advances, even if he's been nice to her in the past. She has the right to say no, even if he's a good looking guy who's bought her a couple of drinks and taken the time to get to know her friends. She has the right to say no, for any reason, always, and it doesn't mean that she should be blamed. It means that she didn't feel anything for the guy, or that she's got a thing for someone else, or that his hair really is just that unattractive. It doesn't mean that the guy didn't make a move soon enough and now she's unfairly punishing him for it, cheating him out of what is rightfully his. That's not what it means.

So, to sum up — dudes, sometimes a girl you want to get with just isn't want to get with you, no matter how many vanilla lattes you've gotten for her. And girls, don't let anyone feel bad about yourself if you've turned a guy down — it's entirely within your rights. And if you end up as friends, then consider that as valuable as well. It might take a little bit of time, but let's start putting the friend zone behind us right now.