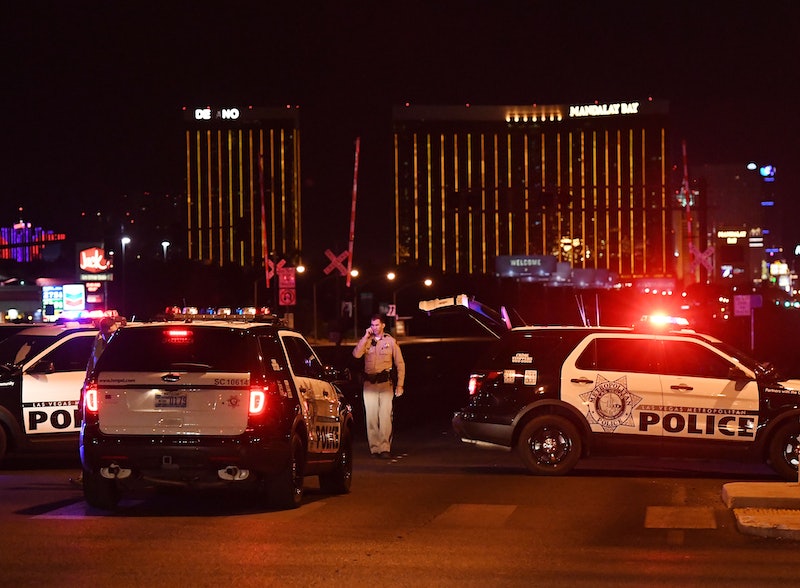 No, not at this point. We believe it was a local individual. He resides here locally. ... We don't know what his belief system was at this time.

By Las Vegas law, however, the mass shooting certainly falls under the definition of terrorism. As The Independent reports, the state's statute reads:

[An] act of terrorism means any act that involves the use or attempted use of sabotage, coercion or violence which is intended to cause great bodily harm or death to the general population.

It's not hard to imagine that the reluctance to associate a mass shooting with an act of terrorism could stem from the shooter being a local, white, American man. Shaun King tweeted Monday morning:

Only in America can whiteness prevent the man who conducted the deadliest mass shooting in American history from being called a terrorist.

The president, for one, did not refer to the event as a terrorist attack in a tweet posted early Monday.

However, the president has not held back in the past from denoting attackers as "terrorists."

"Another attack in London by a loser terrorist," he tweeted in the immediate aftermath of an attack on the Underground, while authorities were still determining who the suspect could be.

Following the Orlando shooting, which prior to Las Vegas had been the deadliest shooting in U.S. history, Trump wrote on Twitter:

Appreciate the congrats for being right on radical Islamic terrorism, I don't want congrats, I want toughness & vigilance. We must be smart!

Almost all perpetrators of mass shootings in the United States are white American men, which some observers have linked to the typical reluctance to denote a mass shooting as an act of terrorism.

Instead, terms like "lone wolf" and "mentally ill" are often used about white male terrorists like Dylann Roof — a term, in fact, that was used almost immediately about the suspect by Sheriff Lombardo.