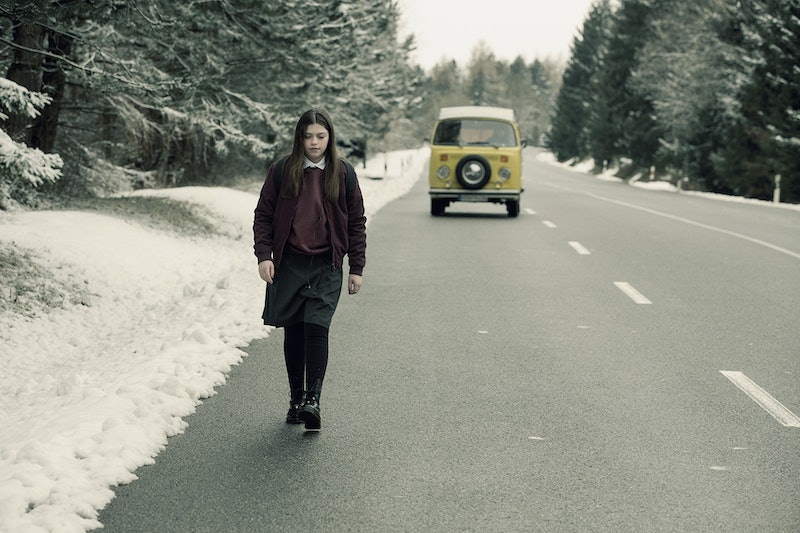 Season 2 of Starz's anthology series The Missing premieres on Sunday, Feb. 12 — and, in a gift to viewers who love to marathon mystery series (*raises my hand*), the entire season will immediately be available on demand and through the Starz app. If you missed Season 1, I highly recommend watching it, but don't fret — you can easily follow Season 2 of The Missing even if you're brand new to the show. The new eight-episode installment focuses on the return of a young woman, Alice Webster, who has been missing and presumed dead for over a decade. There's just one catch — there's something so different about her that Alice's mother begins to question if it's really her child who has returned home. The plot has all the makings of a gripping mystery, but is Starz's The Missing based on a true story?

It'll have you on the edge of your seat, but The Missing is pure fiction. There have been rare instances of imposters pretending to be missing children — the 2008 film The Changeling was based on the true story of a runaway who pretended to be a kidnapped 9-year-old boy. More recently, a 2012 documentary The Imposter told the story of con artist Frédéric Bourdin, who posed as Nicholas Barclay, an American boy who had been missing for nearly four years. Bourdin successfully convinced police, the FBI, and even Barclay's family that he was the missing teen. After several months of living as Barclay, his story unraveled and Bourdin was eventually sentenced to six years in prison for perjury and obtaining false documents. In The Imposter, he admitted that his actions were "cruel," "bad," and "evil," but Bourdin said he didn't feel guilty for impersonating Barclay.

So, these cases aren't unheard of — but The Missing doesn't draw inspiration from a specific event.

According to the show's writers, Harry and Jack Williams, the idea for Season 2 stemmed from a conversation they had while working on the first installment of The Missing, which focused on a little boy who was never found. In an interview with The Mirror, they said:

"While we were writing the first series, we began talking about what the show would have been had Oliver Hughes been found... This story grew out of that discussion. It's the other side of the coin to series one — an exploration of loss, of freedom, of how the past can shape the present in myriad ways that we cannot fully understand."

Alice Webster isn't the only missing girl on the show — when she first reappears in the season premiere, she utters the name of another young girl who vanished around the same time as she did: Sophie Giroux. Coincidentally, Detective Julien Baptiste (who also appeared in Season 1), is haunted by his inability to solve the Giroux case, and he comes out of retirement when he sees an opportunity to bring Sophie home. It appears that Alice holds vital clues about Sophie and she indicates they were held captive by the same man — she states the girl is alive, but in weak condition from being starved and abused.

Baptise travels to Iraq when he finds a clue that he believes could lead him to the girls' abductor. But, the bigger mystery is who is pretending to be Alice Webster, and why. Is she protecting her kidnapper due to Stockholm Syndrome or some other reason? Or, could she actually be Sophie Giroux and, in that case, where is the real Alice? Thank goodness Starz is making the entire season available on Feb. 12 — this is definitely the perfect series to marathon.