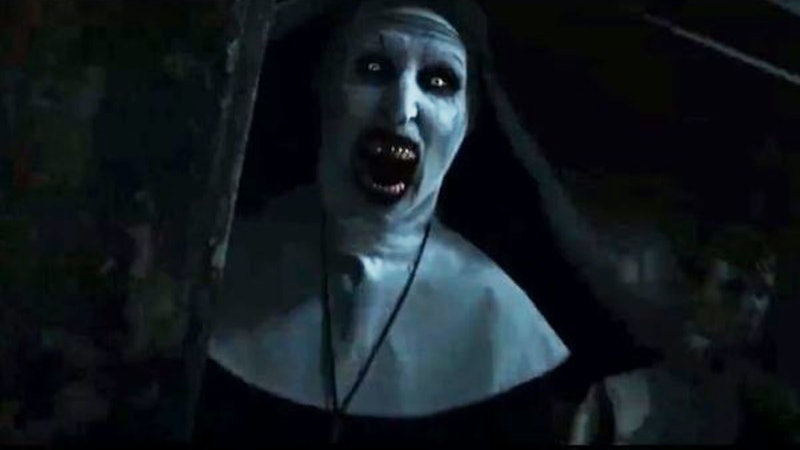 As if the first two Conjuring films — and the subsequent Annabelle spin-offs — weren’t terrifying enough, director Corin Hardy has decided to showcase the origins of that creepy nun from The Conjuring 2 in an upcoming prequel. Aptly named The Nun (released in UK cinemas on Sep. 7), it looks as though the fifth instalment of the film series is going to be one hell of a nightmarish scare. It's described as "the darkest chapter" in the teaser trailer, and certainly begs the question, is The Nun based on a true story? After doing a little digging, let's just say I’d start "praying for forgiveness" now if I were you.

It’s no secret that the stories presented in the Conjuring universe are based on the real life case files of paranormal investigators Ed and Lorraine Warren. Portrayed by Patrick Wilson and Vera Farmiga in the films, the duo investigated a number of paranormal occurrences during the '70s and '80s, and are probably the most-well known investigators in their field. From a Raggedy Ann doll possessed by a demonic spirit named Annabelle (sound familiar?), to their involvement with the Amityville horror case, to an investigation that involved a man who believed he was literally a werewolf, the Warrens gave the horror world a plethora of source material to scare audiences senseless, including demons. Yes, demons.

So where does the nun fit into all of this? Well, The Nun isn't based on a true story but the very prominent demon that possess her is. Valak is the name, and residing as "the Great President of Hell" is his game, according to website Week In Weird. No, he wasn't made up by Hollywood. His origins can be found in the 17th Century tome The Lesser Key of Solomon.

The ancient book describes Valak as the commander of over 30 legions of demons, and is certainly one entity that you do not want to mess with. If you want to freak yourself out further, read this excerpt from the book in question:

"The Sixty-second Spirit is Volac, or Valak, or Valu. He is a President Mighty and Great, and appereth like a Child with Angel's Wings, riding on a Two-headed Dragon. His Office is to give True Answers of Hidden Treasures, and to tell where Serpents may be seen. The which he will bring unto the Exorciser without any Force or Strength being by him employed. He governeth 38 Legions of Spirits, and his Seal is thus."

Creepy, huh? However, Valak isn't exactly what you'd picture as your typical Satan-esque leader of the underworld — a gaunt-looking Nun is ten times scarier than a winged-child riding a dragon, IMO. But don't let the get-up fool you, because this demon means business. He may aid you in finding hidden treasures, but only if he finds you worthy. If not, well, prepare for torment is all I can say.

Valak may be a very real demon, but it has little to no significance in the Warren's cases nor the Enfield haunting explored in The Conjuring 2. Speaking to website io9, Conjuring director James Wan explained that the demon was haunting Lorraine in the films as opposed to the cases at hand. "The demonic entity that takes on the form of the nun has got nothing to do with Amityville," he told the website. "[Lorraine's] just having a psychic premonition."

Instead of being the reason for all these hauntings that the Warrens are investigating, Valak's inclusion in the Conjuring lore instead helps bridge the films together and in turns adds a strong foundation to the overall vision of the films.

The exact details of the Warrens' paranormal investigations may not be represented accurately in The Conjuring films, but nonetheless Wan has already created a solid franchise of hauntings and demonic activity that are just begging to be explored further. Whether that's through demonic origins, further investigations, or introductions to other demons featured in The Lesser Key of Solomon, it looks as though Wan has a lot more his sleeve — especially if The Nun does as well as its predecessors at the box office.

I just hope that you'll be able to sleep well tonight after learning about Valak, because I sure as hell won't.

More like this
The Biggest Differences Between 'Bullet Train' & The Book It’s Based On
By Arya Roshanian
Jodie Comer & Tom Hardy Join A Motorcycle Gang In The Bikeriders
By Catharina Cheung
The Sean Bean Intimacy Coordinator Controversy, Explained
By Sam Ramsden
Gassed Up Promises All Things Action, Risk, & Redemption
By Frances Stewart
Get The Very Best Of Bustle/UK