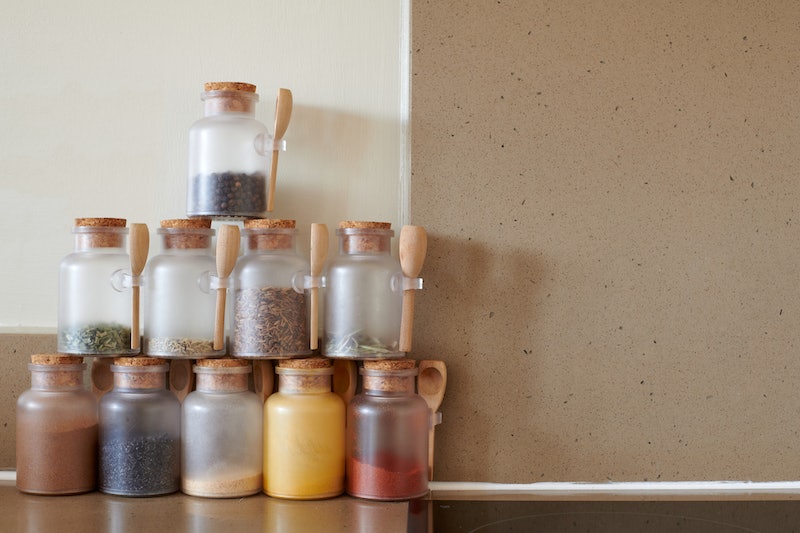 There was a time, back in high school, when attending a party meant getting dared to drink nutmeg or smoke rosemary, based on claims that they could have a psychedelic effect. Considering the fact that I don't recall anyone ever actually getting high off any of these concoctions, I assumed the trend would die out. But quarantine restlessness has driven today's teens to revive the nutmeg challenge on TikTok. The challenge involves chugging mugs of water or tea laced with heaping spoonfuls of nutmeg. With over six million views on nutmeg challenge hashtags on TikTok, the trend has dangerously influential qualities.

One chemical in nutmeg, myristicin, is linked to a psychoactive effect when consumed in large quantities (not the quarter teaspoon your average pie recipe calls for). It affects the central nervous system by "enhancing the neurotransmitter norepinephrine," which eventually (over the course of a few hours) leads to side effects like nausea or hallucinations.

According to nutritionist Dr. Melina B. Jampolis, M.D., while nutmeg is loaded with anti-oxidants and anti-inflammatory compounds when consumed in small quantities, there are life-threatening repercussions in having too much. "Research has found that taking even as little as two teaspoons (10 grams) can have significant side effects including intense nausea, dizziness, extreme dry mouth, hallucinations, memory loss, and even seizures." Jampolis says that while this effect is rare, nutmeg can "lead to organ failure in large doses and has been linked to death when combined with other substances designed to produce a hallucinogenic effect."

Most #nutmegchallenge videos on TikTok feature teens complaining of headaches or feeling sick, or feeling nothing at all, but others claim to have an audience of fairies or elves who applaud their Savage dance moves. Nutmeg can easily be found in most kitchens, which explains why it's trending, despite the danger. According to naturopathic psychiatrist Dr. Samantha Desmond, N.D., L.M.H.C.A., M.H.A., E.M.T., chief medical officer at reSTART life, a treatment facility for digital addiction, these kinds of challenges provoke people to risk their health for clout.

"The underlying nature of TikTok challenges play strongly into 'in and out group' psychological predispositions by promoting a sense of belonging," she tells Bustle. This can cause people to seek "external reinforcement of self-worth," that "ultimately proves to be fleeting and requires the next challenge to fulfill, and the next, and so on," Desmond says. Because the desire for social connection is (understandably) strong right now, it can "overpower individual safety concerns, especially if the individual is younger and neurologically primed for riskier behaviors," aka guzzling nutmeg on TikTok.

The most practical reason to say no to the nutmeg challenge is that it could land you in the ER, Desmond says. If you experience heart palpitations or an increased heart rate, anxiety, hallucinations, upset stomach, blurred vision, urinary retention, tremors, or seizures, you could be having a nutmeg overdose and should head straight to the ER. Reminder: it takes as little as two teaspoons to trigger these possible effects. TL;DR? There's a far greater chance that consuming nutmeg will make you incredibly sick and uncomfortable, not high.