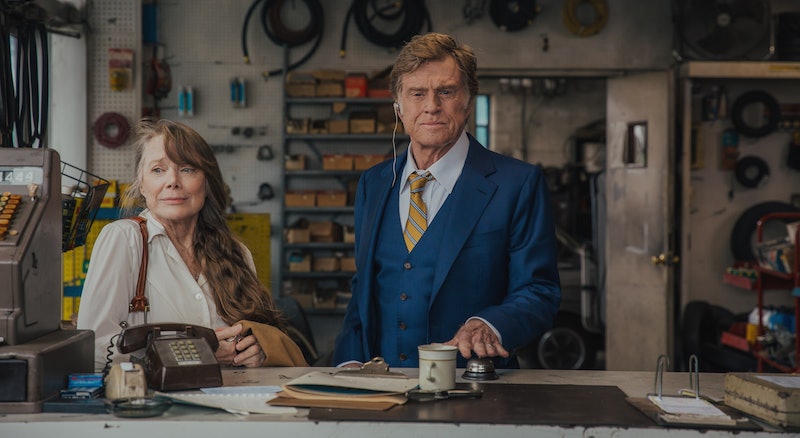 Screen legend Robert Redford may be retiring from acting, and if that's the case, then he picked the perfect film for his swan song. Redford's new movie, The Old Man and the Gun, sees him as an elderly bank robber who's nearing the end of his run. The film takes place in the '70s, and it certainly seems like it could have actually taken place in real life, but did it? Is The Old Man and the Gun a true story, or is it a work of fiction?

The movie is indeed based on a true story. The "old man" in question was an actual person named Forrest Tucker. In the film, Redford portrays Tucker as a literal career criminal — as in, he considers robbing banks to be his job — and that's exactly what the real Tucker was, too. Born in 1920, Tucker was first arrested at the age of 15 for allegedly stealing a car, and he then spent the remainder of his life in and out of prison, according to the Los Angeles Times' Mike Clary. Over the course of his criminal career, Tucker was jailed numerous times, mostly for bank robberies, and he managed to escape from prison as many 18 times, including from San Quentin prison at the age of 70. But in 1999, the law finally caught up with Tucker for good.

That was the year when Tucker was arrested for the final time following what would be his last heist. As a 79-year-old, an armed Tucker stole over $5,000 from a bank in Jupiter, Florida, and was subsequently arrested during his attempted escape. This ended up being his last hurrah, as he was later sentenced to 13 years in prison for the crime. He only lasted five, passing away while incarcerated at the age of 84. The account of his last heist, as well as some of the other highlights from his six decade career as a criminal, were detailed in a 2003 New Yorker article by David Grann titled "The Old Man and the Gun." The article later made its way into Grann's book of Essays, The Devil and Sherlock Holmes, and was used as the basis for the film.

Although the film is based on a true story, it does take some liberties with the truth. For instance, with 82-year-old Redford portraying Tucker, you'd think the movie would take place during the robber's final heist in 1999 since their ages match up, but that's not the case. The movie is instead set during the late '70s/early '80s, when detective John Hunt (Casey Affleck in the film) was on the trail of Tucker and the crew of older robbers he led known as The Over the Hill Gang. While Hunt really did go after the gang during this time period, Tucker wasn't that old yet. He turned 60 in 1980, meaning he was only about three-quarters of the way through his career as a bank robber, and was not nearing the end of his run like in the film.

Minor quibbles aside, the movie is a relatively truthful account of one of the most wild true criminal cases in U.S. history, and it's the perfect vehicle for Redford to steal our hearts one last time.