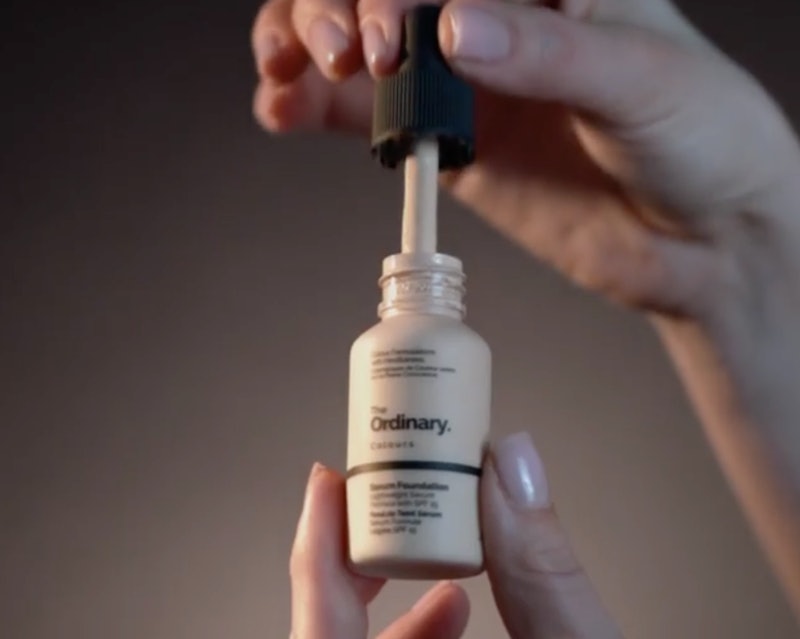 The Ordinary swooped in and put all of our skin care to shame with their pared down ingredient lists and low, low prices, and now they just might be doing the same with our makeup. A quick poke around their website reveals they have makeup in the works — although in The Ordinary way, it sounds anything but typical (irony: acknowledged). The single landing page reads that "Colours By The Ordinary" is "A Range of Evolutionary Colour Formulations with Mindfulness."

Colour with a U — classic Canadians. They go on, writing, "Beautiful pigments are more beautiful with integrity. The Ordinary will soon be launching an evolving range of colour formulations with an ordinary name: Colours." Is The Ordinary releasing foundations? It seems like it — despite the luminous swatch, highlighter-esque swatch, it's looking like a base is coming our way. Confirmation: the brand teased a serum foundation on their Instagram.

In the comments, they elaborated that "The Ordinary Colours will have two SPF coverage options! 'Buildable Coverage' and 'Sheer Coverage.'" One — when have you ever heard of a brand actually giving more information on a product in the comments? Unheard of, I'm shook.

And two, SPF included! Jubilation. Upon a little internet sleuthing, more information came from the UK. According to Really Ree, expect big things: Ree writes that the two foundations, named "The Coverage Foundation and Serum Foundation," will allegedly be available in 21 shades, allegedly on March 27 (seconded by their Insta caption: "coming in March").

Via Ree, the "Coverage Foundation is £5.90 and the Serum Foundation is £5.70," which translates to $7.37 and $7.12. So, hold off on placing that order or live to rue the shipping. Ingredients haven't been released in full, but Ree writes that the foundations "utilise pigments suspended in an advanced next-generation system for ultimate skin naturalness," and "contain SPF 15 without any chemical sunscreens and without any nano particles." So, a physical block of some sort must be included. One ingredient down.

It's up in the air where the integrity aspect will figure in, but it could be something like Lush's Color Supplements plus Perricone M.D.'s No Foundation Foundation serum. At least in appearance — hold the $60 price tag.

The Ordinary's MO is subtly sneaking things into existence, forgoing most brands' huge hype lead-ups for largely guerrilla Instagram drops. Most recently, that was their new exfoliation products. This is the line's first leap into color cosmetic territory (though sister brand Hylamide has their Photography Foundation), and if it's as well-thought out as The Ordinary's much-lauded primers, it could give the drugstore some serious competition.