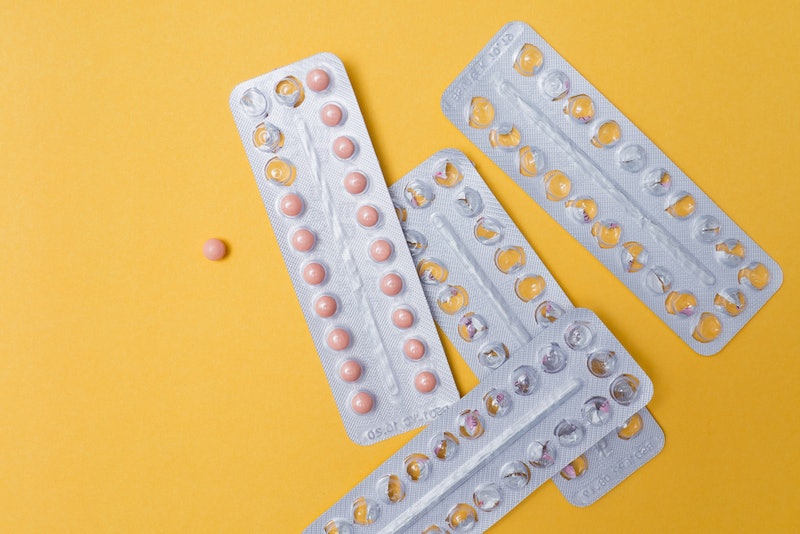 There's an awful lot of factors to consider when deciding whether to go on the pill, or which brand to select. But there's an extra question those on plant-based diets might look to answer: is the pill vegan? Here's what you need to know about the contraceptive pill, as well as the other options available to you. (First, a quick disclaimer: above all else, you should raise any concerns with your doctor.)

One of the most commonly accepted definitions of veganism is that promoted by The Vegan Society, a British group founded in November 1944. "Veganism is a way of living which seeks to exclude, as far as is possible and practicable, all forms of exploitation of, and cruelty to, animals for food, clothing or any other purpose," the charity says. "One thing all vegans have in common is a plant-based diet avoiding all animal foods such as meat (including fish, shellfish, and insects), dairy, eggs, and honey — as well as products like leather and any tested on animals."

Perhaps the biggest concern for vegans taking the contraceptive pill is its lactose content. According to the Specialist Pharmacy Service, provided by the NHS, there is currently no oral contraceptive available in the UK that doesn't contain lactose.

Doctors could previously prescribe Femulen, a progestogen-only pill that was lactose-free; however, the pill was discontinued in the UK in March 2013 by its manufacturer, Pfizer (to the dismay of many, a quick Google reveals). Nevertheless, The Vegan Society advises vegans on the pill, "Remember that if this is the contraceptive that works for you, you are not obliged to switch to an animal-free version."

As lactose-free alternatives, the Specialist Pharmacy Service recommends condoms, the IUD or IUS, the patch, the injection, the implant, or the vaginal ring. However, the hormonal options amongst those suggestions raise another issue. According to The Vegan Society, the hormones they contain are often animal products.

There are, however, some vegan-approved brands. The Evra contraceptive patch is suitable, as are the Noristerat and Depo-Provera injections. The copper IUD is also hormone-free. As for condoms, The Vegan Society lists multiple products with no animal-derived ingredients, including Boots' own brand, Durex' non-latex range, and the entire Mates SKYN range.

When it comes to medicine, however, it's impossible to avoid products tested on animals: according to the Association of the British Pharmaceutical Industry, all new medicines must be tested on animals before they can progress to human testing.

But that absolutely shouldn't lead you to abstain from medicines altogether and risk compromising your health. The Vegan Society says that vegans should avoid using animal products, or products tested on animals, "as far as is practicable and possible" — and when the only oral contraceptives available contain lactose, while all medicines are required to be tested on animals, it seems pretty impossible to avoid them.

"Sometimes, you may have no alternative to taking prescribed medication. Looking after yourself and other people enables you to be an effective advocate for veganism," the charity says.