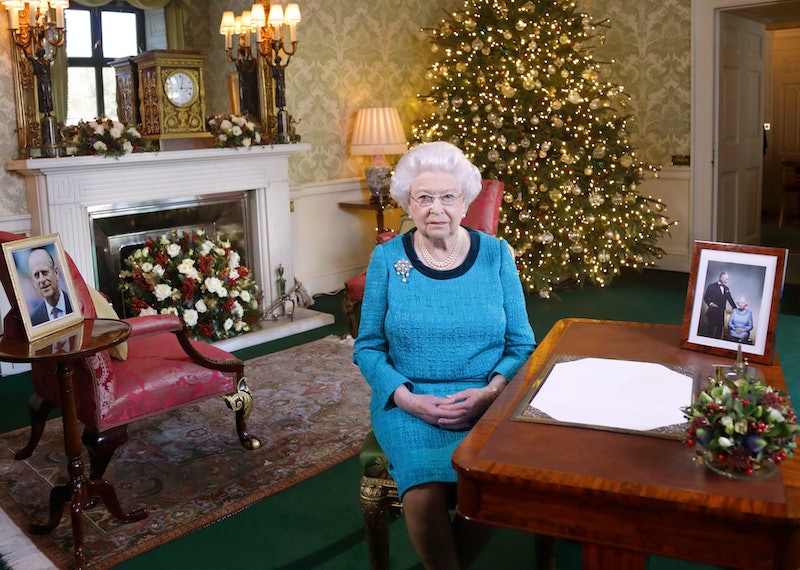 It wouldn't be Christmas Day in my household without at least one person having a complete meltdown about when exactly the Queen's speech is on. While it's pretty much a given that it will air at the same time it does every year, it's always a highlight for me to see who caves to the panic. I'm hardly one to talk though, as I seem to always find myself wondering — is the Queen's Christmas speech is live? Well, I think now's as good a time as any to finally put my mind at ease once and for all.

According to The Independent, the Queen's first Christmas message on television was broadcast live in 1957. Queen Elizabeth II had been addressing the nation prior to this via the radio, but she was "moved to overcome her anxiety about the new medium in the interest of showing a more human side to her character," as the newspaper described. She looked understandably uncomfortable, and I think anyone else would too in such an unfamiliar setup. That coupled with the fact that the nation is watching and listening to your every word.

"It is inevitable that I should seem a rather remote figure to many of you," Queen Elizabeth II said during her 1957 address. "A successor to the kings and queens of history; someone whose face may be familiar in newspapers and films but who never really touches your personal lives. But now at least for a few minutes I welcome you to the peace of my own home."

These broadcasts would continue for another two years, until 1960 marked the switch to a pre-recording. This decision was made by Buckingham Palace, "allowing for mistakes to be corrected and for copies to be sent overseas in advance." There was also the issue of interference, which presented itself during the first live broadcast where police radio transmission from the U.S. managed to seep their way into the address, as the Guardian reported.

Anyway, back to the ease of the speech being sent overseas. At the time, there were ten countries in the Commonwealth with varying time zones so this would make it abundantly easier for citizens of these countries to receive Queen Elizabeth II's festive message as well as the UK.

I can imagine that the switch from live to pre-recorded also lifted a veil of anxiety from Queen Elizabeth II, allowing the following addresses to feel much more natural and somewhat calmer as the only people watching her give the pre-recorded address would be those in the room around her.

And with the passage of time comes new technology, including teleprompters. Instead of glancing down at her notes as is seen in the first live broadcast, it seems as though Queen Elizabeth is reading from a screen beside the camera while also being able to look directly at the viewer, as evidenced in her speech last year.

While it would be nice to watch the Queen speak to families across the country live at Christmas, I feel much better knowing she's doing it comfortably and in her own way. Plus, she'd be interrupting her own family's Christmas dinner too, and I don't think Britons would want to be responsible for that.