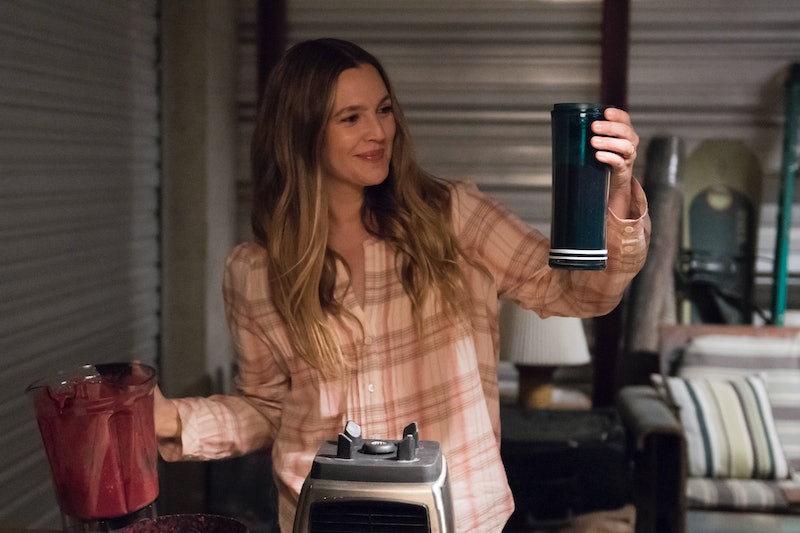 Drew Barrymore is the latest movie star headed to TV in the new Netflix series Santa Clarita Diet, which premieres on Feb. 3. The actor stars opposite Timothy Olyphant in the comedy that has debuts its marketing campaign during the Golden Globe Awards on Sunday night. So is there an actual Santa Clarita Diet and what could it be? According to USA Today, Barrymore tells the publication that in the Santa Clarita Diet, her character Sheila is a zombie. Knowing that, I would hope that the diet isn't a real one, other than being the things that zombies traditionally eat in fictional tales, such as brains, human flesh, and freshly killed meat, according to The Daily Meal.

Santa Clarita is located about a half-hour drive from Los Angeles in Southern California — and it sounds like the Santa Clarita Diet name takes inspiration from many that do currently exist, like the South Beach Diet or the Mayo Clinic Diet. But while Sheila is a zombie, Barrymore told USA Today that her character takes on this monumental life change in a grounded way. "What if she finds herself, and we do this sort of Cro-Magnon type of evolution with her over the course of the 10 episodes," she said. "No gimmicks, no prosthetics, just an awakening."

And several Netflix promotional photos do offer some clues to additional parts of the zombie diet. The photo below shows Barrymore's character with raw meat, as described in USA Today.

And then there's this photo of Olyphant with a shovel, which means he's either digging up bodies, defending himself from a zombie attack, or doing some yard work, because maybe this diet could require fresh-from-the-garden veggies. (Hey, there could be a plant-based zombie diet out there, especially in Southern California.)

Finally, the photo below shows Olyphant's character looking super shocked at Sheila, so she may have gotten very zombie-like, she wants to eat his brains, or she was sleepwalking and he's waking her up, because the Santa Clarita Diet could also require lots of sleep.

Either way, Barrymore recently told Vanity Fair that she had a blast filming the new series with Olyphant. "It was really, really fun for me. It was very positive, because I got to do fun stuff in it that felt very on par with where my personal life was at," she told the magazine. "I think I've been so distracted with my kids [Olive and Frankie] that any work makes me feel like it's taking me away from them. And this felt like something to dive into, which was really fun for me."

With or without brains on the menu, Santa Clarita Diet sounds like a series that could leave viewers hungry for more episodes.

More like this
Watch The Thrilling Teaser Trailer Of 'Shadow And Bone' Season 2
By Gretchen Smail, Jack Irvin and Sophie McEvoy
Mike Flanagan Teases 'The Midnight Club' In This Exclusive, Creepy Clip
By Grace Wehniainen
Twitter Is Pouring Out Some Zhampagne As ‘Schitt’s Creek’ Leaves Netflix
By Brad Witter
The First Clip From Netflix’s Queen Charlotte ‘Bridgerton’ Prequel
By Bustle Editors
Get Even More From Bustle — Sign Up For The Newsletter