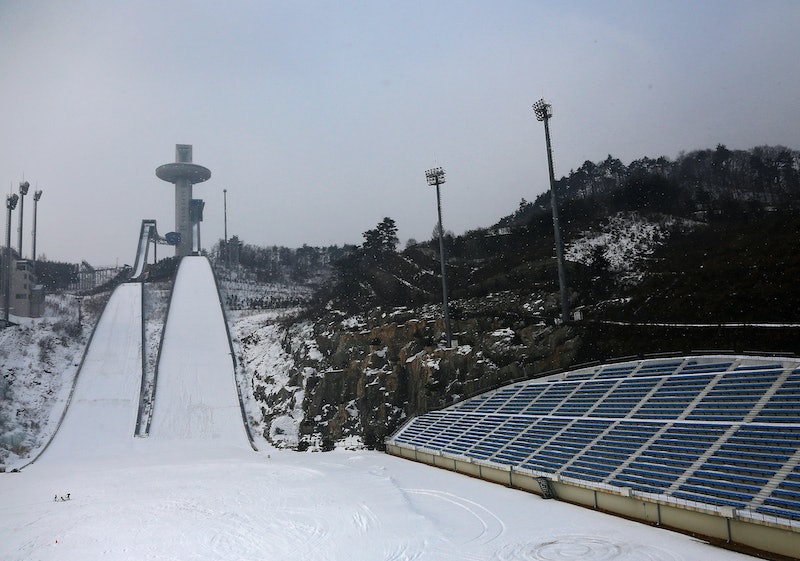 The Winter Olympics will kick off in Pyeongchang, South Korea, and the Games are set to put the city on the map for skiing and other snow-related sports. But is the snow in Pyeonchang real? For now, it looks like temperatures will be plenty cold to keep snow on the slopes. But that being said, Pyeongchang has ways to supply enough enough snow for the competition, even when the climate is not ideal.

The Telegraph reports that temperatures may even be too frigid for those that come out to watch the games in Pyeongchang this February. Because the main stadium has no roof, 35,000 spectators could have to endure temperatures that feel like the equivalent of 7 degrees Fahrenheit. Game officials are said to be preparing for the worst, with items such as hot packs and blankets on hand for those who brave the freezing weather.

The North Korean city will probably not have to worry about keeping snow on the mountains. That being said, not all of the snow will necessarily be real. As The New York Time notes, South Korea receives much less snow than rival skiing countries such as Japan and China. Yongpyong, a ski resort that will host slalom events during the Olympics, opened in 1975 with the help of a snow-making machine. The resort receives just eight feet of snowfall a year, but it stays cold enough to keep that snow from melting.

When speaking with reporters, Pyeongchang’s Olympics chief Lee Hee-beom didn’t seem concerned about producing enough snow for athletes to compete. “Even without snow from the skies, we will make snow,” Lee told NBC News. "Artificial snow! We have lots of snow makers. No snow, no problem!"

The city of Turin, Italy, dealt with concerns about snow in a different way. Back in 2006, the city of Turin faced an issue when it hosted the Olympics. Temperatures were set to be in the 40s — considered downright balmy for a winter Olympics host city — for the duration of the international competition. Rather than make snow, the Olympic committee just sent athletes up to higher altitudes in the Alps where snow was guaranteed. The city of Turin only hosted indoor events, such as hockey, figure skating, and speed-skating. Snow-dependent athletes headed to ski resorts such as Cesana Pariol.

As The Washington Post noted at the time, the challenge didn’t really affect athletes. The more concerned parties were the broadcast journalists covering the games, who had to try to find a way to film the industrial city (“marked by mud, concrete, cranes and bulldozers”) in a way that would captivate viewers expecting a winter wonderland.

A similar problem arose in 2010, when Vancouver hosted the winter Olympics. When the Canadian city didn't produce the amount of powder expected for athletes to perform, the Olympic committee tried everything from airlifting snow by helicopter to putting dry ice near the snow to keep it from melting.

There has been talk about the hazards of a snow-less Beijing Olympic Games for years. Now that the Chinese capital is set to host the winter games in 2022, members of the committee are likely hard at work on figuring out how to manufacture snow for the competition sites. As Business Insider noted back in 2015, one of the biggest drawbacks to Beijing is that there is generally no snowfall. The International Olympic Committee pointed this out, but the city won the bid nonetheless. Once Pyeongchang is over with, the Beijing camp will have four years to get its act together.