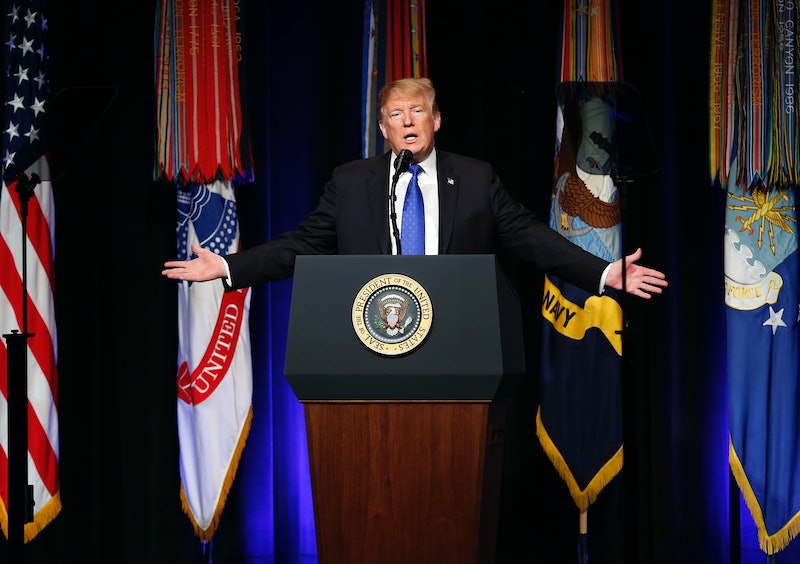 It's all but guaranteed every year that the president will deliver a State of the Union address before a joint session of Congress. This year, however, that's not necessarily the case, and whether or not President Trump's State of the Union (SOTU) is happening is a little bit up in the air.

In light of the longest-running government shutdown in U.S. history, House Speaker Rep. Nancy Pelosi, who is tasked with formally inviting the president to deliver his SOTU address, asked Trump to either delay giving his speech, or else deliver it in writing. The SOTU was originally on deck for Monday, Jan. 29; Pelosi requested Trump reconsider those plans in a letter dated Jan. 16. She specifically cited security concerns, given that the ongoing shutdown is affecting federal law enforcement agencies.

In a letter released on Wednesday afternoon, Pelosi made clear that she did not intend to host this year's SOTU address until the government's doors reopened. “I am writing to inform you that the House of Representatives will not consider a concurrent resolution authorizing the President’s State of the Union address in the House Chamber until the government has reopened," she wrote in a letter shared on Twitter.

For over a week, it's been very unclear whether or not the SOTU would move forward as originally planned. This confusion was amplified earlier on Wednesday, when Trump sent Pelosi a letter, vowing to deliver his speech to Congress, and arguing that there was no reason to be concerned about security.

"Even prior to asking, I was contacted by the Department of Homeland Security and the United States Secret Service to explain that there would be absolutely no problem regarding security with respect to the event," Trump wrote, according to a copy of the letter shared to twitter by Press Secretary Sarah Sanders. "They have since confirmed this publicly."

The president went on to say that because he didn't believe there were any security concerns, he would plan to deliver his address on Monday, Jan. 29, the date Pelosi had originally offered him. But technically, Congress has to invite the president to deliver a SOTU address, and on Wednesday, Pelosi made clear that she would be standing by her Jan. 16 letter.

"Sadly, given the security concerns and unless government re-opens this week, I suggest we work together to determine another suitable date after government has re-opened for this address or for you to consider delivering your State of the Union address in writing to the Congress on January 29," Pelosi had previously written.

Beyond the Speaker of the House formally inviting the president, SOTU plans also require that both the House and the Senate pass a joint resolution establishing the planned joint session, CNBC reports. In her Wednesday correspondence with the President, Pelosi said that she did not intend to allow for such a measure to move forward.

While the Constitution requires that the president occasionally address Congress and assess the state of the union, it does not dictate that the speech be given every single year. That being said, in modern American history, SOTU speeches are typically delivered annually, and if one weren't to take place this year, its absence would definitely be noticed.