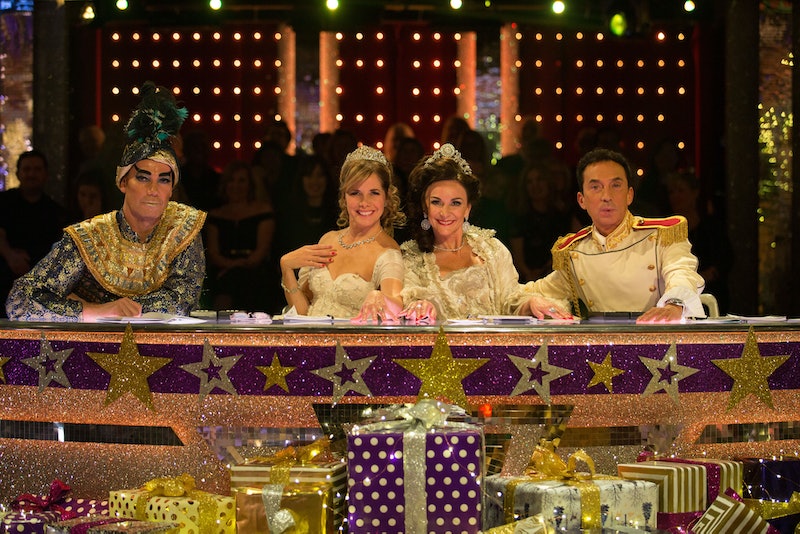 For the past 13 Christmases, Strictly has blazed back onto screens with an explosion of glitter, camp, and pantomime. This year will be no different, as previous contestants rejoin the show for a one off, festive themed special. Previous years have seen the likes of Colin Jackson, Rachel Stevens, Ainsley Harriott, and Sophie Ellis-Bextor returning to murder the ballroom dancefloor once more. The contestants for this year's soirée have been announced, and I imagine the ballroom has already been glitzed and spritzed, but how exactly will this year's edition work? Will the Strictly Christmas special be live?

Set to air on BBC One at 5.30 p.m. on Christmas Day, according to the Radio Times, the show won't be tearing the contestants away from their families on the 25th, as no, the Strictly special won't be broadcast live. Unlike the regular Saturday shows which are recorded live, according to the Radio Times, the Christmas special is instead recorded ahead of time, like the weekly Sunday results show. The magazine reported on Dec. 17 that filming for this year's special took place on Nov. 26, at the usual Elstree Studios base.

That means a winner has already been crowned, but who that could be is still anyone's guess. This year's cohort of contestants are as mixed as the most awkward of Christmas dinner guests, so it's bound to be as hilarious as it is fabulous.

For some, the dancing hiatus has been much longer, with Vaughn confessing to the BBC: "“Having not danced at all since 2012 I can’t be any worse than then as I had no clue then, still have no clue, but can’t wait to have some fun and at least it will help lose a few pounds over the Xmas party season!” Others are going to be taking the competition a bit seriously, like former JLS member Merrygold who told the BBC: “I’m so happy to be able to get back in the Strictly floor. I feel like I’ve got some unfinished business with it!”

As the BBC also announced back in November, the theme for this year's special is something they're calling "fairytales and making dreams come true," which might be why Caroline Flack and Anne Widdecombe are pictured wearing whatever those outfits are above. Dressed up in similar garms, the contestants will be aiming to impress the judges with a routine set to a classic Crimbo tune. However, it'll be the studio audience deciding which of the six couples will get to lift the iconic silver trophy.

That means it won't be you who decides which of the celebs will win, either. Who knows which couple the audience might have chosen, you might even be looking at a White Widdecombe Christmas.