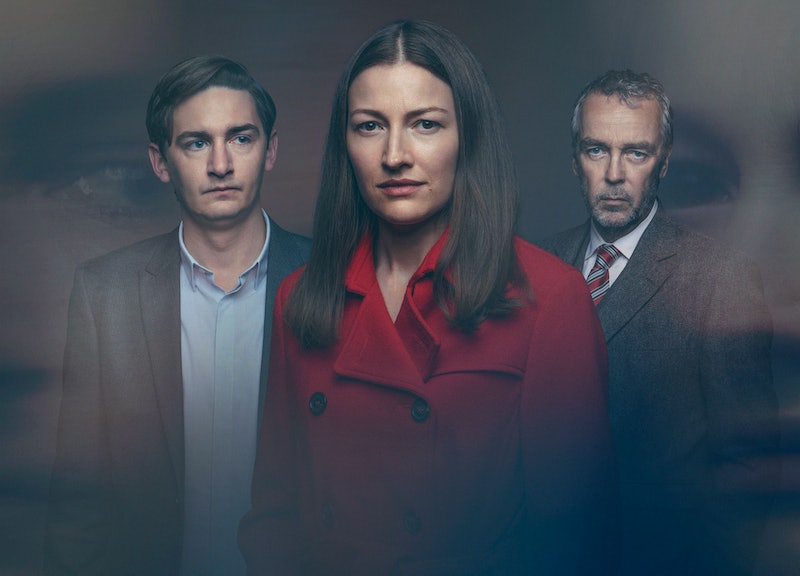 If you're looking for some fresh new drama to keep you entertained this week, look no further than the BBC's upcoming thriller The Victim. Premiering tonight (March 8, 2019) and continuing on through the week, the show will navigate how a seemingly simple criminal case can be uncover so many more dark and twisted plot lines under the surface. With that in mind, is The Victim based on a true story, or is it a fictional drama inspired by real events?

Told over four parts, The Victim will follow DI Grover's (John Hannah) investigation into the attack on bus driver Craig Meyers (James Harkness) after he was identified as the murderer of Anna Dean's (Kelly Macdonald) nine-year-old son, who was killed 15 years prior. Anna ends up being accused of revealing the identity of her son's killer and inciting murder in the process. Through Craig and Anna's perspectives, and the trial itself, the BBC promises that The Victim will provide twists and turns as "new potential suspects will be revealed and long-buried secrets [will be] unearthed as the story builds to a final, devastating climax." Yeah, this is one you don't want to miss.

While it may seem as though the case depicted in The Victim shares some similarities with real-life cases such as the 1993 murder of two-year-old James Bulger, show creator Rob Williams has made it clear that the drama is fictional.

"Well it's not based on any one case, or any existing case," he explained at a preview screening, as Radio Times reports. "It explores a territory that sadly, there are many cases in which juveniles have committed horrific offences, and not been named for legal reasons. Some of who have been given new identities. So it's a territory we explore — it's not about any single case... it's hopefully a very even-handed treatment of a very emotive issue, and it is entirely fictional."

Macdonald herself saw the similarities between her character Anna's story and the Bulger case, and acknowledged why people may collate the two. "I was very aware of the James Bulger tragedy at the time because it was so nightmarish," she said in a recent interview with The Observer. "I can see why people might compare, but The Victim isn't based on any specific real-life case. There are parallels but it's a fictional story."

Although, to make The Victim as realistic as possible, Williams made sure he grounded the show with thorough research into true crime. As Williams told the Radio Times:

"I read about a huge amount of cases, but only really to inform the characters that we already had cast in our drama. And hopefully it’s distinctive and stands on its own two feet."

Williams explained to the Radio Times that he wanted to make sure The Victim would inform viewers, rather than just "entertain" them, especially with a subject matter such as this. "The worst thing in the world, for me, would be to be accused of treating the murder of a child in a TV way… we certainly haven’t, I can say hand on heart, there has never been any intention to use this subject matter for entertainment and nothing more," he said.

Williams also wanted to demonstrate the the lasting effects crime can have, and how it can end up affecting more than just the victims. "I called the show The Victim because I've been interested in a long time in the ripple effect of crime, not just through a family, but through a community, and sometimes through a country," he explained to BBC. "It's a thriller with a big question at the heart of it, but it's also, essentially, a character-driven piece about the lasting effect of crime."

Williams went on to tell the BBC:

"Put simply: as a mother who has lost a child in horrific circumstances, what would you do if you simply couldn't move past that? How far would you go to feel that some justice had been done? And alongside that, how would you feel if you were accused of something so grevious without any evidence, knowing full well how difficult it is to prove you haven't done something?

The Victim will begin tonight (April 8, 2019) on BBC One at 9 p.m. The four-part drama will continue nightly this week, concluding on Thursday (April 11).