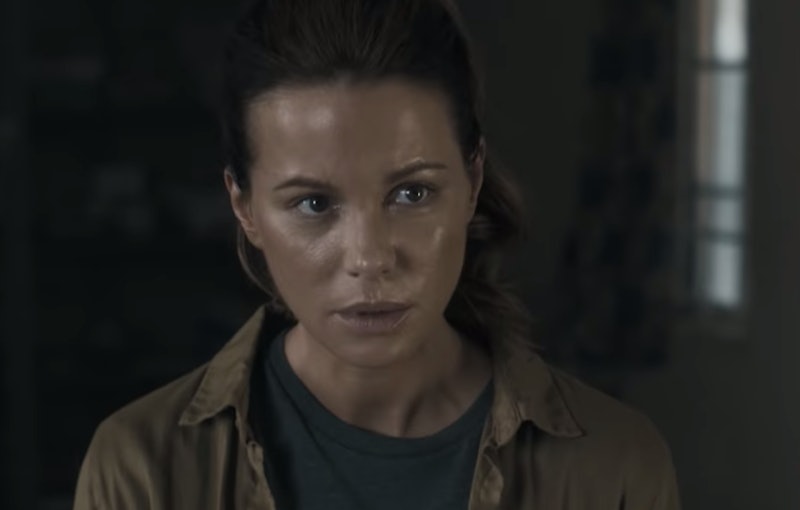 Not to be confused with the Steve McQueen thriller Widows, Amazon's new series, The Widow, follows Georgia Wells (Kate Beckinsale), whose husband, Will, died in a plane crash three years ago. Or did he?! After seeing a lookalike on TV, Georgia begins to suspect that Will is still alive, and things continue to escalate when she travels to the Democratic Republic of Congo to try and uncover what really happened to him. But while the premise sounds like an exciting cross between Gone Girl and Proof of Life, it doesn't appear that The Widow is based on a true story.

The series is airing both on the British channel ITV and on Amazon Prime in the U.S., according to Deadline, and was a collaboration between the two networks. But the plot seems to be entirely fictional — The Widow was written by brothers Harry and Jack Williams, who previously penned the British series The Missing, among other shows. "Harry and Jack Williams have created a powerful story, which will be brought to life by one of the world’s most talented actresses," Brad Beale, Vice President of Worldwide TV Content Acquisition at Amazon Prime Video told Deadline.

The series was filmed in South Africa, Wales, and Rotterdam, per the same report, which sounds like a difficult shoot. "There's eight episodes, so the first three months you're shooting any number of the first four of those episodes," Beckinsale said in a cover story for DuJour magazine. "I've never filmed like that, and I've also never done a shoot where I didn't know what was going to end up happening to the character. You're out there filming for two months and suddenly you go, 'Oh, this is the ending."

However, it wasn't just the length of the filming that proved challenging — the sheer heat was also difficult for Beckinsale. "It was incredibly hot — so hot that I ended up getting taken to the hospital one day for passing out!" she told the magazine. "I just keeled over into this very nice, huge actor, which was lucky." The previews show her character running around the Congolese jungle in search of Will, who she's convinced faked his death. What we don't know yet, however, is why.

The series also stars ER alum Alex Kingston as Will's former boss, per the New York Post. Furthermore, Game of Thrones actor Charles Dance appears as Martin Benson, a family friend. The trailer reveals that Martin will help Georgia investigate what happened to Will, whose disappearance is becoming more and more fishy. "We found transactions in your name — big cash withdrawals — after the crash," he tells Georgia in the trailer, later saying, "Someone planted a bomb on that flight, and we're going to find out who."

So although The Widow isn't a true story, that may prove to be a good thing, depending on what really happened to Will. Whether he faked his own death, someone else did, or he really has been dead this whole time, you'll have to watch to find out.