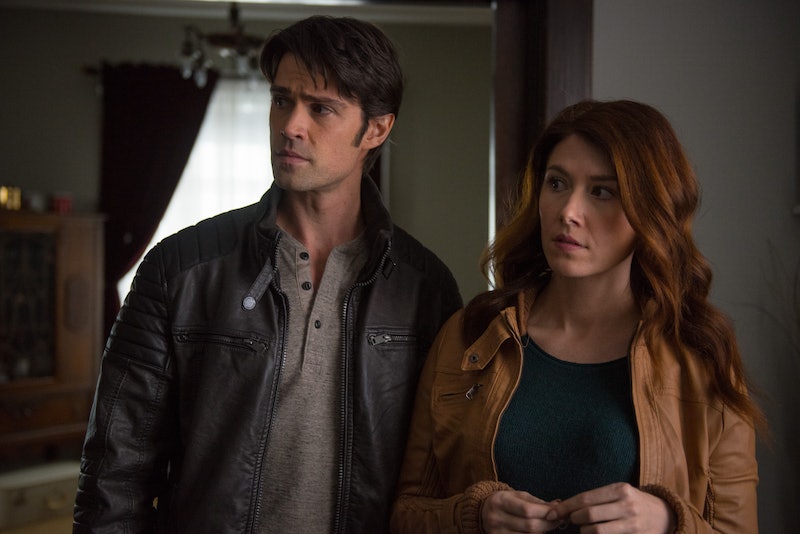 Imagine waking up with a sexy firefighter. That's a good start to a story, right? Wrong. Neither of you can remember of what happened, and a mysterious note written in your handwriting — that you don't recall writing — tells you what to do next. Thus begins The Wrong Bed: Naked Pursuit, which stars Jewel Staite (who also played Kaylee Frye, the best character in Firefly and I will fight you on that) and Corey Sevier as two strangers who wake up together and must figure out what happened the night before, based on the cryptic clues they’ve left themselves. But is The Wrong Bed based on a true story like so many other Lifetime movies, or is it a work a fiction?

First, the letdown: this has not happened to anyone in the real world, at least not in the exact way that it does in the movie. (People definitely have confusing mornings all the time, and probably do their own detective work to piece together past events.) Anyway, The Wrong Bed is actually inspired by a bestselling action romance novel by Jill Monroe, appropriately entitled Naked Pursuit. The book was published by Harlequin — yes, that Harlequin — as part of their Blaze series. Here’s the description, which seems pretty similar to the Lifetime movie:

What did she do last night?

Med student Stella Holbrook just had the best night of her life meeting a hot, hunky firefighter, making out with him at the roller rink and then engaging in a whole lot of deliciously wicked behavior in a swank hotel room. Only, when she wakes up the next morning, she can't remember a thing…

Owen Perkins has no idea how he ended up naked in a bathtub with Stella. All he knows is that while their minds are blank, their bodies definitely remember what happened. All they have to go on are cryptic notes they left for themselves. Piece by piece, they'll uncover the truth about last night…one exquisitely sexy moment at a time!"

In fact, there’s a whole series of The Wrong Bed books, all of which appear carry the same basic premise — specifically, hot dudes and getting into bed with them. There’s Naked Thrill, which was also written by Monroe; A Wrong Bed Christmas, which also features a fireman as the male lead; and my personal favorite title for a romance novel, Once Upon A Mattress, which I’m assuming has nothing to do with the Princess And The Pea-inspired comedy musical of the same name.

Having read the book beforehand won’t necessarily spoil The Wrong Bed for you, either. In a guest post for Hypable, Monroe described the experience of seeing her Harlequin romance made into a TV movie, and noted that this adaptation has changed some things. “This experience has been amazing,” she wrote. “It’s fun to see what things I wrote translate from page to screen, and cool to spot the tweaks, twists and added subplots of the screenwriters.”

So rest assured that the fate that befalls Stella and Owen in The Wrong Bed: Naked Pursuit hasn't been inflicted on anyone else — at least, not literally. Whether or not Harlequin readers have started incorporating elements of the book into their fantasy life is, of course, between them and their sexual partners.