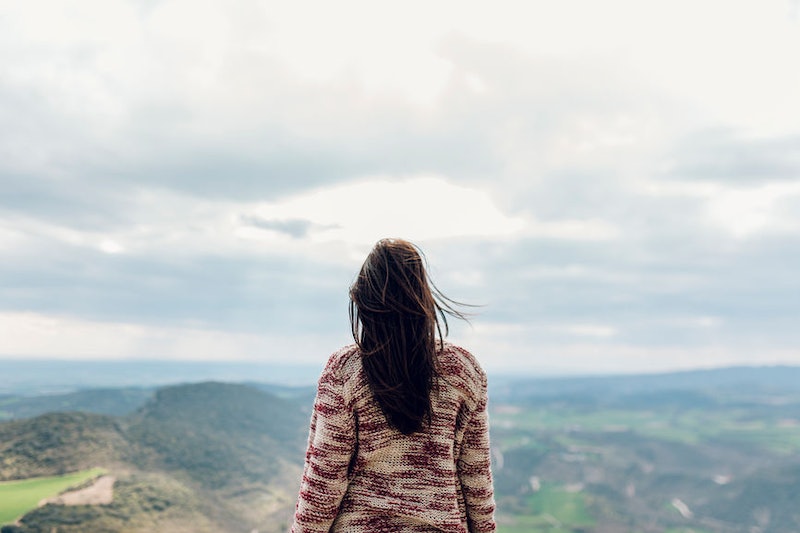 Get married, have kids. Those are supposed to be two key stages of adult life. But what if you don’t do either? What are the stages of your life? Is there a blueprint for you? Those questions are at the heart of No One Tells You This, a memoir Glynnis MacNicol wrote as she reached the end of her thirties as a lifelong single woman with no children.

I’m 65, and I have been single, with no kids, my whole life. I’m also a social scientist. For decades, I have been studying single people and their place in contemporary society. No One Tells You This inspired me to look to other scholars and the books they have written for answers to MacNicol’s questions. I also dipped into contemporary memoirs about single life and asked other single women about their lives.

MacNicol was approaching her landmark birthday with trepidation; she describes herself as “someone who was now spending the last hours before her birthday seized by the belief that she was being marched to her demise.” In fact, though, she was actually marching into the mainstream of 21st century life. Being single in your 30s is now a global phenomenon. Many will continue to live single well beyond their 30s, maybe for their entire lives. In the U.S., for example, it has been predicted that about 25% of today’s young adults will reach the age of 50 without ever having married. There’s nothing at all odd about being single.

In fact, though, she was actually marching into the mainstream of 21st century life. Being single in your 30s is now a global phenomenon.

It is also not uncommon to wrestle with the possibility that there is no script for your life if you stay single. Unmarried women, and the women who write about them, have been doing so for at least a quarter-century. When Marcelle Clements wrote about single women in 1998, she called her book The Improvised Woman. Four years earlier, sociologist Tuula Gordon described her research on single women in San Francisco, London, and Helsinki under the title, Single Women: On the Margins?.

Those authors were asking questions. I was hoping that my fellow academic psychologists who studied adult development would have some answers. Instead, I quickly discovered their longstanding practice of ignoring lives like mine. In 1953, when Robert Havighurst published his influential model of the stages of adult life, he declared that the initial tasks of early adulthood were selecting a mate, learning to live with a marriage partner, and starting a family.

For more than four decades, academics hadn't tried to describe how adult life might unfold for people who stay single and have no children. Then in 1995, clinical psychologists Natalie Schwartzberg, Kathy Berliner, and Demaris Jacob, in Single in a Married World, offered their model of the stages of the single adult life. Among their stages were “accepting the possibility of never marrying,” “accepting the possibility of not having their own biological children,” and “defining an authentic life for oneself that can be accomplished within single status.”

I never wanted to marry. For a while, I thought I was just slow to develop that desire. Eventually I realized that I was never going to want to marry; single was who I was and how I live my best life. That insight changed everything. The experience was nothing like what those psychologists described. I wasn’t “accepting” my single life as a sad concession to a second-rate life. I wasn’t trying to figure out a set of goals that could be “accomplished within single status,” as if my single life would box me in. Committing to living single was liberating and thrilling.

Eventually I realized that I was never going to want to marry; single was who I was and how I live my best life. That insight changed everything.

When I was in my twenties and thirties, I didn’t know any other single people who were as delighted as I was to be single. Now it is not so rare. In 2015, I started an online group, the Community of Single People, primarily for people who want to live their single lives fully, joyfully, and free of stereotyping and stigma. There are now close to 3,000 members. I spoke with them, as well as some other single women, about what they thought of the clinical psychologists’ descriptions of the stages of single adult life. Renee Nault, a 37-year-old illustrator from British Columbia, says, “I never had to ‘face’ or ‘accept’ anything.” She also poses a question: “Is one of the stages of married life ‘coming to terms with the fact that you’ll never be single again’?” Kristin Noreen of Bellingham, Washington, a 54-year-old author of the memoir, On Silver Wings: A Life Reconstructed, says there was never any “acceptance” for her, either: “It was more ‘striving for.’”

As far back as her early teenage years, Jenny Bhatt realized that marriage and children were never going to be at the top of her list. A writer in her mid-40s currently living between the U.S. and India, Bhatt says, “Growing up in a conservative family in India, the more my parents talked about how young women should conduct themselves to secure good husbands, the more I was put off. I always knew I would be defined by a career/vocation (what I do) rather than who I am (somebody's wife or mother).”

As for my fellow scholars, I was still waiting for someone to write about single women’s lives in a more affirming way than the therapists had. Then along came sociologist E. Kay Trimberger. After interviewing long-term single women over the course of nearly a decade, she published The New Single Woman in 2005. Trimberger concluded that the foundation of a meaningful single life could be built on six pillars. A fulfilled single woman, she said, “has a home that nurtures her,” “satisfying work,” “some connection to the next generation,” and “a network of friends, or of family and friends.” She also “creates and maintains a community” and “is satisfied with her sexuality.”

"I always knew I would be defined by a career/vocation (what I do) rather than who I am (somebody's wife or mother).”

Amy Walters, 40, a molecular biology researcher from Ohio, likes the open-mindedness of Trimberger’s conceptualization: “Instead of saying what type of home, job, or sexuality a single person must have, it says that they have found satisfaction in each area of their life, whatever it may look like.”

Many single women have neither the means nor the resources to check off all six pillars and still live fulfilling lives. Others just aren’t interested in all six. Jocelyn Mackie, 44, from eastern Washington, says, “My aunt is always telling me I need to spend more time with children. No. I don’t. I need to be left alone to do art.” Some single women, such as Yolanda Grey of Australia, pointed to pillars that could be added, such as religion, pets, sports, hobbies, and the creation of a legacy.

“Instead of saying what type of home, job, or sexuality a single person must have, it says that they have found satisfaction in each area of their life, whatever it may look like.”

In academia, the scant writings about single women’s lives were treated as a niche topic, if they were recognized at all. The sweeping theories of the stages of life did not seem to have much to say about people like me or Glynnis MacNicol or any of the other women – or men – who stay single and never have kids. To see whether I was missing anything, I asked Northwestern University Professor Dan McAdams, one of the leading scholars of adult development and identity, if he knew of any models of adult life that include single people who have no kids. “The grand theories of developmental psychology, such as Havighurst’s and Erik Erickson’s, have mostly fallen into disuse,” he tells Bustle. “The big problem is exactly the issue you are facing: Stage theories do not accommodate non-normative life paths. And as it turns out, non-normative life paths are more and more the norm.”

If all your friends seem to be following the basic sequence of getting married, then having kids, it can be hard to recognize just how unusual your friends are. Today in the U.S., about as many adults 18 and older are unmarried as married. Even at 40, more than one in three people are not married. Increasingly, even people who do marry are spending long stretches of their adult lives single.

Of those women who are married by their early 40s, about 10 percent of them never had any kids. Of those who did, some did not follow the stage-theory sequence; that is, they had kids first.

Household data provide another indication of just how uncommon the sentimentalized nuclear family actually is: In the U.S., there are fewer households comprised of married parents and their children than of single people living alone. The Australian author Clare Payne, in One: Valuing the Single Life, points out that there are now at least 25 nations for which the same is true.

If not marriage and children, then what? How do today’s single women describe the stages of their lives?

During her early adult years, Keturah Kendrick, 43, just didn’t see herself as someone who would marry. At the time, everyone else seemed preoccupied with marriage, so her experience felt peculiar. That, she said, was the first stage of her adult life. The next stage, in her early thirties, was about “being able to claim the identity of single and seeing it as necessary in the way that others claim marriage.” In her current stage, from her late thirties to the present, she is “figuring out how one ‘partners’ when marriage is not desirable, yet companionship (and regular sex) are.” For Kendrick, these contemplations aren’t just personal. She is helping all of us understand what it means to live single, as, for example, in her forthcoming book, No Thanks: Black, Female, and Living in the Martyr-Free Zone. She also invites other black women to share their non-traditional life stories in her podcast “Unchained. Unbothered.”

Eva Papadopoulou, 43, a psychologist from London, has a different kind of description of the stages of her life: “So far my stages are: 20s, learn and experiment; 30s, build and resolve; 40s, travel and enjoy.” Bobbie Spellman, a 62-year-old professor at the University of Virginia who married in her 50s, tells me about the preceding decades. In contrast to a man she once dated, who defined his stages “by the girlfriends he had at the time,” she defines hers “by education/profession.” Same for Rebecca Nesvet, a college professor from the Midwest, who describes the stages of her life as “BA, MA, PhD.” Sonya Ashby, a 46-year-old library media specialist from West Virginia, says, “Mine has gone something like this: Bachelor’s degree; establish career; side hustles; author/artist/designer; godmother; Master’s degree; National Board Certification; homeowner; assuming leadership roles in union and community organizations; godmother duties waning as kids grow up; maintain career; caring for older people; more focus on personal health and interests; retirement planning; travel; whatever I damn well please!”

Women in the literary world have also had their say about how single women’s lives unfold. Jami Attenberg’s novel, All Grown Up, Christina Patterson’s memoir, The Art of Not Falling Apart, and Kate Bolick’s memoir and cultural commentary, Spinster: Making a Life of One's Own, each describes a personally inflected pathway through decades of single life. Their accounts, together with the stories I heard from so many other single women, all pointed to the same bottom line: There is no one sequence of stages for people who are single and have no kids. There is no blueprint. Instead, we get to create our own life paths. The possibilities are endless. Whether that sounds frightening or exhilarating separates people who still think there’s something wrong with being single from those who know there’s not and will blissfully milk their single lives for all they are worth.