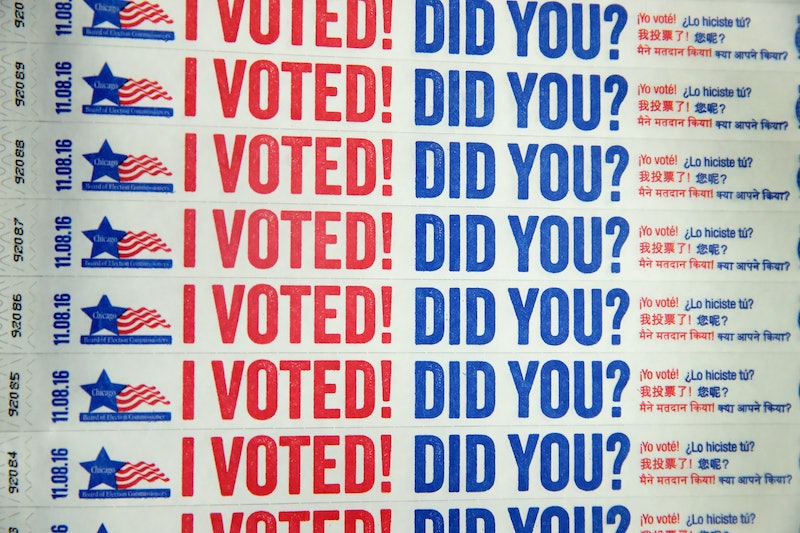 Voter suppression is a serious issue that takes many forms — but it's a lot more subtle than you might think. When it comes to voter suppression in the midterms, you might not even know it's happening, but you can bet that a bunch of (strategically placed) red tape will end up blocking some people from voting this year.

Basically, any action taken with the goal of preventing or dissuading you from voting is voter suppression. You often hear about voter suppression in the context of policies that have made it harder for certain groups of people, or for people who live in certain areas, to cast their ballots. These barriers are bureaucratic for the most part. Voting rights advocates point to voter ID requirements, decreased early voting opportunities, polling station closures, voter roll purges, and gerrymandering as means of voter suppression.

Voting rights groups like the American Civil Liberties Union are challenging most of these obstacles in court, but there's still the possibility you could run into difficulties at the polls. Don’t panic, though. There are a few simple steps you can take to make sure you (and the people you know) don’t encounter any barriers to voting this year. Let’s walk through some of the hurdles that could prevent you from voting, and then we’ll talk about what you can do about them.

Alright, what's the first one?

People who support voter ID laws often claim that they prevent voter impersonation fraud — when one voter pretends to be another and votes for them. But that kind of fraud is so rare that it practically doesn't exist. According to a report by the Brennan Center for Justice at the NYU School of Law, a nonpartisan institute that focuses on voting rights and related political issues, impersonation fraud occurs between 0.0003 percent and 0.0025 percent of the time.

If you’ve ever needed to renew your license or passport, you know that it takes time, effort, and money...

But how does having to show a photo ID at the polls suppress voting?

Not everyone has access to a photo ID. According to research published in 2017, a voter ID law in Texas had a disproportionate effect on racial minorities, as well as low-income and less-educated voters. According to Eitan Hersh, a Tufts professor who worked on that study, “white registered voters are significantly more likely to possess a voter ID than African-American or Hispanic voters." A separate study published in 2009 on voters in Indiana, a state with strict voter ID laws, found that “minority, low-income, less-educated, and the youngest and oldest residents of Indiana” had much less access to photo ID.

If you’ve ever needed to renew your license or passport, you know that it takes time, effort, and money — which are luxuries not everyone has at their disposal.

Got it. What are these other forms of voter suppression?

Back in 2013 when ruling on a case known as Shelby County v. Holder, the Supreme Court struck down a key section of the Voting Rights Act that let the federal government monitor and intervene in changes to voting laws in places with a history of racial discrimination. Three years later, the Leadership Conference Education Fund, a civil rights organization, found that southern counties previously monitored for racial discrimination under the Voting Rights Act had closed at least 868 polling places since that Supreme Court decision.

If we’re talking about obstacles to voting, not having easy access to a polling place is pretty self-explanatory. Fewer places to vote means that certain people in certain areas may have a harder time getting to the polls.

Voter rolls are the lists of registered voters in every district. When somebody is purged from the voter rolls — perhaps because they haven’t voted in a set number of years — it means they’ve been taken off the lists and have to register to vote all over again.

It’s your vote — just make sure you get to use it.

That’s a pretty big barrier to voting, especially if the person who's been purged doesn't realize it until the deadline to register has already passed — or until they show up at the polls. This was widely talked about in North Carolina in 2016, when a federal judge ruled that voters had been illegally dropped from the rolls and ordered state officials to restore them.

I've been hearing a lot about gerrymandering, too. Is that voter suppression?

While gerrymandering doesn't prevent someone from voting, it can dilute the effect of that person's vote. Allow us to explain.

Let’s say you’re throwing a party and you want your guests to vote on what kind of dessert they'll be having. In order to save time, everyone will first vote among their seatmates, and then each table will get to cast one vote based on that result. So if five out of seven people at a table want pie, that table’s vote gets counted for pie.

But don’t forget that as the host, you get to decide where people sit. So if you really wanted to get macarons, you could strategize to make that happen. You could assign the seating such that most tables have a majority of macaron-lovers sitting at them and the guests who prefer pie are split up or concentrated at just a few tables. This arrangement guarantees that pie lovers' votes are overshadowed by your fellow fans of French sweets.

In gerrymandering, the tables are congressional districts, and the people controlling the seating arrangements are state politicians. Every vote should count the same no matter where you are, right? But that isn’t the case in gerrymandered districts, which are designed to give the party drawing the lines an advantage over the opposing party.

If you’re still confused, the Washington Post dug up a great explanatory graphic that doesn’t involve any dessert metaphors.

What can I do to make sure nothing keeps me from voting?

You can use a tool like HeadCount’s to figure out what the voter ID requirements are in your state, and make sure your ID is up to date well in advance of Election Day. And you can check your voter registration status using a tool like Vote.org, which helps you find your polling place and make sure you haven’t been purged from the rolls.

And if you don’t like voter ID laws or other policies that potentially make it harder for some people to exercise their right to vote, you can cast your ballot for a candidate who takes a stand against voter suppression. It’s your vote — just make sure you get to use it.