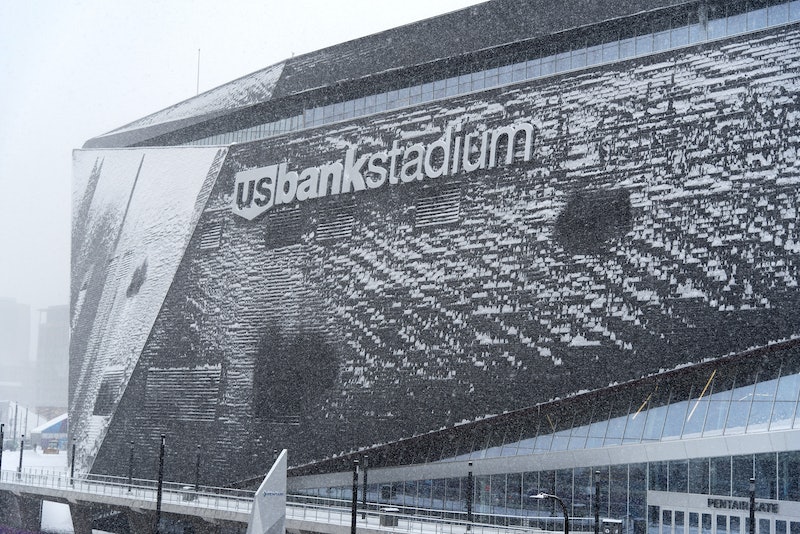 Super Bowl fans stuck at home may envy the crowd watching in real life at the U.S. Bank stadium in Minneapolis, but no one will envy them during the journey to and from the game itself. When time comes to head home on Sunday, live audience members will head out of the stadium's balmy indoor 70-degree oasis and into the brutal cold of zero degrees — or even negative degrees. That's right — how cold it is in Minneapolis puts it on track to be the coldest Super Bowl on record.

The Southeast Regional Climate Center at the University of North Carolina has been faithfully keeping tabs on Super Bowl temperatures since 1967. So far, football's biggest game has been played outside in an all-time low of 24 degrees. Given its position on the Gulf Coast, it will probably surprise some to learn that chilly game in 1972 occurred in the host city of New Orleans.

Ten years later, fans in attendance at the Super Bowl in Detroit were treated to the coldest temperatures for a game that was played indoors, with a high of 16 degrees and a low of just five.

One silver lining for fans in Minneapolis is that there's currently no chance of snow or other precipitation — at least not until midnight.

The frigid winter temperatures in Minneapolis all but necessitate an indoor stadium. And Minnesota's home team — the Vikings — used to play indoors at the Metrodome, but that complex suffered from a collapsing roof problem. It opened in 1982 to great fanfare, but problems cropped up even before the stadium saw any games. The billowy white roof collapsed under the weight of snow in 1981 during its first test inflation, and then malfunctioned again eight months after the stadium opened. In 1983, the Metrodome roof collapsed again.

Then in 2010, the roof went down completely, causing the Vikings to scramble to find a substitute stadium for a game scheduled just one week later. Besides the enormous logistical and financial tab for the Metrodome's faulty roof, the unreliable dome posed a serious safety hazard as well.

And that began the long road that eventually led to the construction of the U.S. Bank stadium, a veritable wonder of bold architectural design. Just about everyone agrees that the massive complex has earned its many accolades.

But Minnesota's ferocious winter conditions have put even the glamorous new stadium through the ringer.

In July of 2016, because of extreme weather, several zinc panels on the U.S. Bank stadium were dislodged, though they didn't require total replacements, per the Minnesota Sports Facility Authority (MSFA). Still, the affected panels did cause leaks.

Then, in December of 2016, winds that reached up to 90 miles per hour tore a glass panel off the stadium. The fix involved installing 4,000 extra fasteners, which took until October of 2017 to complete.

That being said, not everybody is enamored by Minneapolis' new stadium. As anyone with a window and resident bird population knows, glass can be both deceptive and dangerous for fowl. Audobon Minnesota advised the MSFA to reconsider its enormous use of glass (the U.S. Bank stadium has almost 200,000 square feet of the stuff). Their pleas went unheeded, and countless birds have since perished. A group of volunteers counted 60 dead birds near the stadium over an 11-week period in 2017.

There is such a thing as bird-safe glass, which proponents say would have added just $1 million more to the stadium's $1.1 billion price tag. The MSFA initially rejected that option, but if public outcry gets loud enough, it's possible it'll reconsider.

But given Minnesota's brutal cold, most of Sunday's attendant Super Bowl fans will probably care most that its indoor temperature regulation provides welcome relief from the extreme frigidity outside.