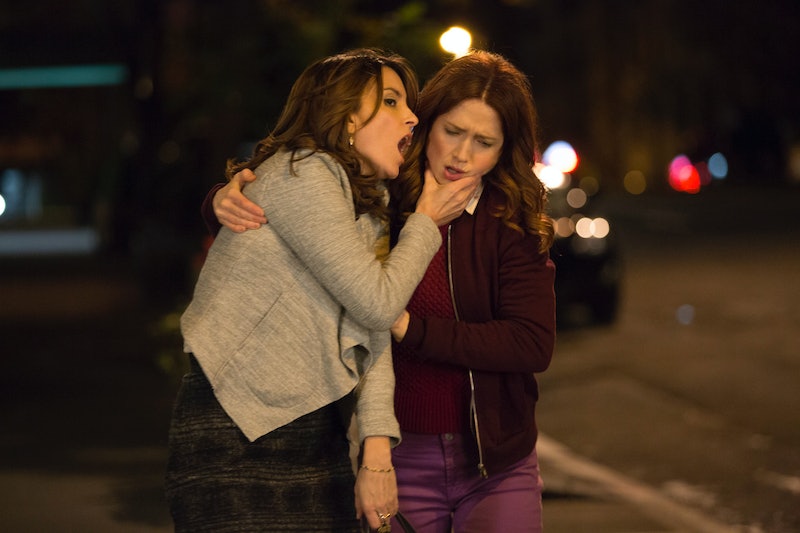 Unbreakable Kimmy Schmidt returns to Netflix for its third season on Friday, May 19. While I'm looking forward to more episodes with Kimmy, Titus, Lillian, and Jacqueline, it remains to be seen which of the show's memorable supporting characters will return. Will audiences see more of Kimmy's therapist Andrea or lawyer Marcia, both played by the show's co-creator and certified comic-genius Tina Fey? Or will the writer and actor show up as a different character? Her fans are hoping that Tina Fey will be in Unbreakable Kimmy Schmidt Season 3.

In Season 1, Fey made an appearance as Kimmy's lawyer, clearly a take on famous prosecutor Marcia Cross. Then she returned for an arc in Season 2 as Kimmy's therapist, who has some emotional baggage of her own. So, will Fey continue with her theme of playing anthological roles?

In an appearance on The Tonight Show Starring Jimmy Fallon, Fey explained she is returning to Unbreakable Kimmy Schmidt in Season 3, in a role fans haven't seen her in before. Fey called her Season 3 performance an "Easter egg." So, who is Fey going to be this season? The answer takes a little bit of explanation.

Fey explained to Fallon that she dressed as redheaded, '70s child star Mason Reese for Halloween because she adores a joyful clip of Reese tap dancing on the The Mike Douglas Show (which ran from 1961 -1981). The writers apparently loved Fey's costume so much and found it so funny, they asked her to make a cameo on the show wearing it.

While I'm not yet sure how a '70s child star fits into Kimmy Schmidt's universe, I have faith after seeing Fey's photo on Fallon that the appearance will be funny. After all, Fey's shows 30 Rock and Unbreakable Kimmy Schmidt are riddled with hilarious, blink-and-you'll-miss-it references and long-running gags.

So, does Fey's role as Mason Reese mean viewers won't be seeing more Andrea or Marcia this season? According to the Season 2 cliffhanger and trailer for Season 3, Kimmy will be divorcing the Reverend this season. Since she's back in a legal dispute, will her Marcia Clark-inspired lawyer make a return? And what about Andrea? The Season 2 "serapy" arc was amazing, and let's face it, Kimmy still must have some unresolved issues.

Fans will just have to tune in to Unbreakable Kimmy Schmidt Season 3 to find out just how much Tina Fey they're getting this season. But, one thing is for sure: some Tina Fey is always better than no Tina Fey.