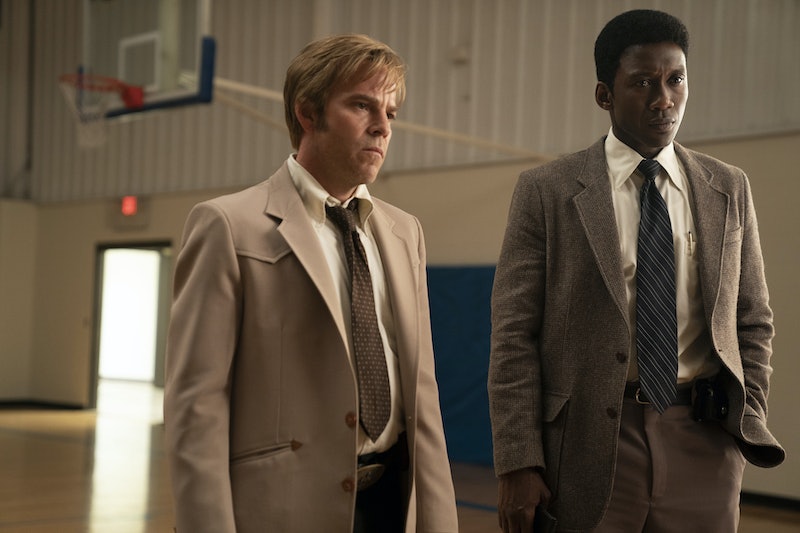 To say that True Detective has a complicated history would be an understatement. While Season 1 received critical acclaim, Season 2 received less than stellar reviews among critics and fans alike. But now that the series is returning for a third installment, which features Mahershala Ali at the helm as Arkansas police detective Wayne Hays, viewers are curious about how this latest installment will fare and whether or not to expect any crossover potential. But if you're worried that True Detective Season 3 will be connected to past seasons then fear not because when it comes to this particular anthology series, each season serves as its own individual entity. No traces of the past will be found in the third season — at least not in the way you may expect.

As the trailer revealed, the story follows Ali's character as he investigates the 1980 disappearance of two children across three different time periods: one when he's 35 years old, another when he's 45, and lastly when he's a 70-year-old retiree who is suffering from early stages of dementia. Given the jump in timelines, Season 3 definitely feels a lot more like Season 1 in regards to overall structure and tone, which was a deliberate choice on series creator Nic Pizzolatto's part.

"It was somewhat deliberate without being forced," he told Entertainment Weekly during a recent interview in regards to organically trying to return to the show's roots. "I felt like there were ways I could harken back to structural devices from Season 1 while letting them evolve — not repeating things but using what had been set down before to do something new."

However, when it comes to any crossover connections with the characters themselves from past seasons, there's none to be found. You won't find anyone from Season 1 or Season 2 popping up throughout the third season or even making a special cameo appearance. Unlike American Horror Story, whose seasons are all connected in some way or another, True Detective makes every season separate, containing zero crossovers.

That being said, Pizzolatto did admit during the same EW interview that he does miss having recurring characters, which could indicate that some time down the line the structure of the series could change. "I dream of making a TV show where you have recurring characters and don’t have to reinvent the wheel every time," he stated. "After one of these I always feel so depleted." Though he did reveal that he already has a tentative idea for a potential fourth season.

But for those who are curious about any possible connections that exist between the various seasons, it's also worth noting that Season 1 stars Matthew McConaughey and Woody Harrelson are both serving as executive producers for Season 3. So, in a way, that translates to a pretty important connection taking place — it's just happening behind the camera rather than in front of it.

So whether you're a returning fan of the show or a total newcomer, you won't have to worry about feeling lost in the plot or worrying about trying to remember what happened during previous seasons. Season 3's narrative stands solo on its own two feet, making it a must-see experience for any avid TV watcher.