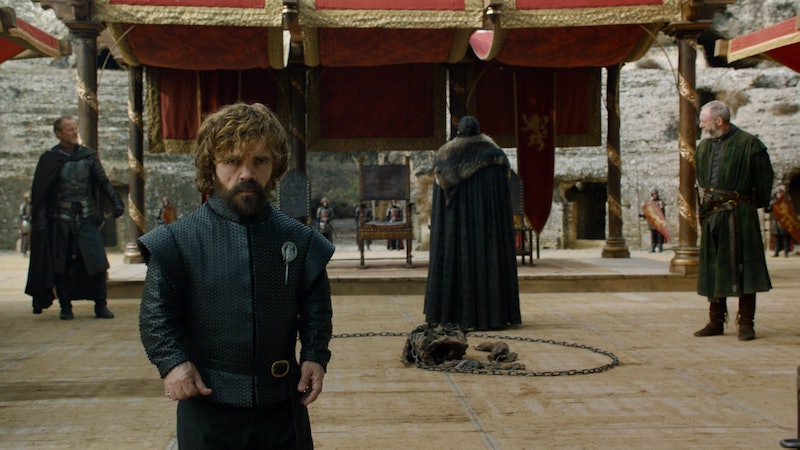 The pressure was definitely on for Tyrion during the Game of Thrones season 7 finale on Sunday. After being on Daenerys' side for the past three seasons, he finally returns to Kings Landing and comes face-to-face with Cersei to call a truce. But things also get a little complicated when he has a heart-to-heart with his sister, and we find out that Cersei is pregnant, giving him a reason to want to protect her in the impending war. So is Tyrion thinking of joining Cersei? A plot twist like this wouldn't exactly be hard to imagine.

When Jon shows up at Daenerys' door at the end of the season finale, you can spot the look of heartbreak on Tyrion's face from a mile away. He's clearly not the first person who's grown to love Dany while acting as her advisor, and watching her relationship with Jon blossom before his eyes could cause him to switch sides just because of his jealousy. There's also the fact that Daenerys getting involved with Jon (who we now know is the actual heir to the Iron Throne) might cause things to get a little too messy for even Tyrion to handle.

On the other side of things, there's Cersei who drops a bomb at the end of the episode by revealing to Jaime — as he's planning out how he'll take the Lannister army north to defend Westeros against the Army of the Dead — that she has no plans on joining forces with Jon and Daenerys to fight the Great War (a plot twist you probably should've seen coming, tbh). Much to the chagrin of her brother, she also reveals that she and Euron have already come up with a plan without him, and this causes him to leave King's Landing altogether. So this means that, if Jaime doesn't ride back to the Red Keep in an attempt to make amends at some point, Cersei is all alone now — and this is definitely not a great time for that to be the case, as the wights and the White Walkers have officially made it past the Wall.

It was already pretty difficult to sympathize with her even when Jaime was on her side, but Cersei being on her own now would likely make her storyline a little less interesting, especially if King's Landing were to come under threat. Since GoT is no stranger to throwing viewers for a loop, maybe that loop will be Tyrion making his way back to Cersei to make things a little more interesting.

Obviously it's still too soon to tell what's in store for the show's next (and final) season. But an alliance between Cersei and Tyrion doesn't seem too hard to fathom at this point.