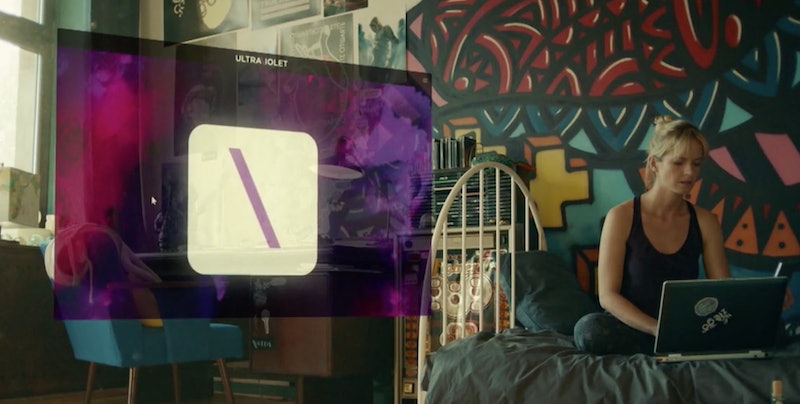 Ultraviolet, a new crime series premiering this week on Netflix, feels like wish fulfillment at its finest for those of us who feel like the internet holds the answer to everything if you try hard enough. Even murder, as the characters in the series set out to prove. Which simply begs the question: Is Ultraviolet based on a true story? Because who doesn't want to be an IRL internet sleuth?

The Polish series centers around a young woman named Ola who witnesses a murder and, frustrated by the criminal justice system, starts to look into the case herself, ultimately joining a group of would-be detectives called "Ultraviolet" who mostly operate online.

While the story itself is fictional, it is based on real events and real people who solve crimes — specially when it comes to identifying missing persons — using social media and the deep dark corners of the world wide web. The story is partially inspired by The Skeleton Crew: How Amateur Sleuths Are Solving America's Coldest Cases, a 2014 nonfiction book by Deborah Halber, according to creator Wendy West. These people are really out there, and Halber interviews them in her book. The "crew" is an organization not unlike the titular group in Ultraviolet.

In the same guest column for Variety, West, the American producer and creator of the series, explains how her own life inspired the series as well:

"Probably the best job I’ve ever had was working on the Showtime series Dexter. In the space between Seasons 7 and 8, my step-brother was shot and killed. It was head- and heart-spinning to suddenly be plunged into a police investigation after having written them for 20 odd years. The beats were the same — the notification, the autopsy, the funeral — but nothing about real life felt familiar. The investigation stalled and my family and I became amateur detectives, determined to solve his case on our own. I am hopeful that we will someday have closure, but no matter what the outcome of that case, I will never stop yearning for justice."

After that tragic experience, West started working on a pilot and modeled the main character after herself. While the death Ola witnesses is not a family one, the protagonist's personality and search for justice is similar. According to the Variety piece, a meeting with a producer who had recently optioned Halber's book brought the two sources of inspiration together. West describes the technique as "DIY CSI" and talked about when the script went to Polish producers and needed to be translated, she made sure they kept the humor her original script intended.

Crowdsource detective work isn't always helpful. Remember the great "Becky with the good hair" case of 2016? But seriously, in 2013, the Reddit investigation of the Boston Marathon bombing lead to innocent people being targeted or harassed largely due to racial profiling. However, the characters on Ultraviolet and the real people they are inspired by have honorable intentions and honed skills.

Halber also has a piece in Time Magazine that serves as a guide to solving crimes with just a computer, if you're interested in taking up the cause. After watching Ultraviolet you may very well want to give it a try.