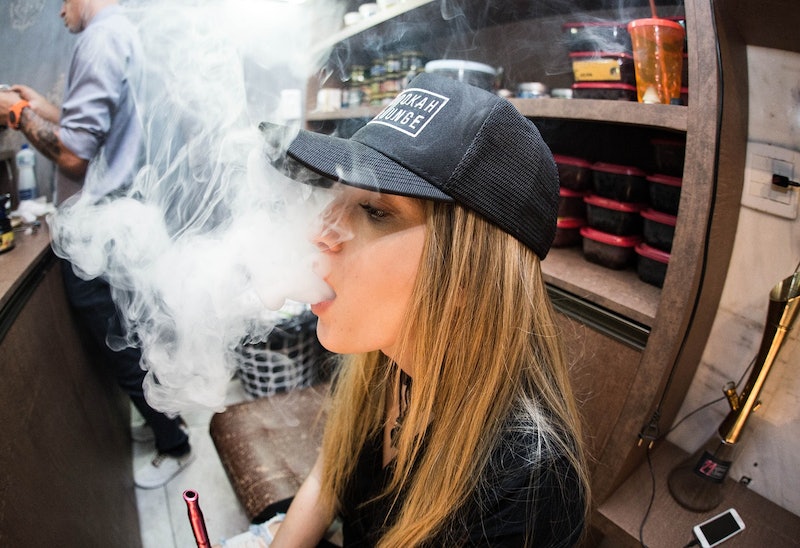 As someone who has had a tumultuous on again, off again relationship with smoking, I also fully support everyone's right to breathe clean air in public places. As e-cigarettes are replacing traditional cigarettes for many smokers, more states are banning vaping where smoking is prohibited. On Oct. 23, New York became the 11th state to enforce a ban on vaping in public spaces where smoking cigarettes is illegal, Tonic reported. Other states that are treating vaping just like cigarettes include: California, Connecticut, Delaware, Hawaii, Maine, New Jersey, North Dakota, Oregon, Utah, and Vermont.

Many people who vape claim that e-cigarettes are not harmful to others in the same way that secondhand smoke is, but a study published in the International Journal of Hygiene and Environmental Health found that e-cigarettes are not emission-free and their pollutants could be of health concern for users and secondhand smokers. What's more is that non-smokers can smell e-cigarettes the same way they can smell regular cigarettes. I have a friend who recently got out of her Uber pool at a traffic light because the driver was vaping, and it was making her sick.

Additionally, The World Health Organization encourages banning vaping in indoor space because, "passive exposure to e-cigarette vapor might lead to adverse health effects according to a systematic review of 16 studies. The levels of some metals, such as nickel and chromium, in second-hand aerosols are not only higher than background air, but also higher than second-hand smoke."

The Case Against Indoor Vaping

According to an infographic from The Scientific American, e-cigarettes were first discussed way back in 1927, but they didn't really hit the consumer marketplace until the early 2000s. If you're not totally sure what an e-cigarette is, it's basically an electronic smoking device that is operated by a battery and looks like a pen, pipe, or even a glass cigarette. "They have containers filled with liquid that's usually made of nicotine, flavorings, and other chemicals," WebMD noted. "A heating device turns the liquid into vapor that you inhale when you take a drag."

While many vapers claim that banning vaping in public spaces will further alienate smokers, the fact that you can see the "smoke" coming from a e-cigarette is enough for many people — including smokers — to question how something that can be seen can't be harmful. Neal Benowitz, MD, a nicotine researcher at the University of California at San Francisco, told WebMD that the evidence that e-cigarettes help people quit smoking is anecdotal. "If there was good evidence that people were using e-cigarettes just to quit smoking, there would be wide support," Benowitz explained. "The problem is most of the e-cigarette use in the U.S. is dual use with cigarettes."

As someone who has struggled to quit smoking, I know that part of the habit that's so hard to abandon is the behavior of holding something in your hand and bringing it to your mouth so it makes sense that e-cigarettes (which I have never tried) could help hardcore smokers wean off their bad habit. But, only if that is indeed their intention. Additionally, supporters of the e-cigarette ban cite normalizing smoking again as an additional reason for banning vaping indoors.

"I'm arguing that we should embrace e-cigarettes as a less risky alternative to tobacco use. But it makes good sense to not renormalize the use of nicotine products by using them indoors," Vaughan Rees, director of the Center for Global Tobacco Control at Harvard University, told Tonic. "That's not inconsistent with saying we want to ensure e-cigarettes are available to smokers if and when they need them."

This is a valid point because very few people start smoking in high school or college without first seeing people they admire participating in the same behavior, which in turn makes it seem appealing. And, it's important to point out that no one who smokes is under any impression that it's not harmful because everyone knows that it is by now. People do things that aren't good for them all of the time with full knowledge of the consequences. However, it should be each individual person's decision about whether or not they want to expose themselves to said dangerous thing.

While, according to an article in the San Diego Tribune, the dangers of vaping are significantly less than smoking in some ways, the long term effects of other chemicals added to vape are not yet known. "Long term studies, following e-cigarette users for a prolonged period of time, tracking not just issues mostly related to cancer, but other specific respiratory and cardiac risks, are still required, before anyone can confidently claim that the harmful effects of switching purely to e-cigarettes are ‘minimal’ . . . .," David W. Bareham, a specialist respiratory physiotherapist in England, told the Tribune.

There was a time not that long ago when people didn't believe second-hand smoke was harmful. Smoking on airplanes wasn't banned until 1990, which feels very recent. Parents smoked in their cars while driving their kids around with all the windows rolled up, which is becoming illegal in some states because we can no longer claim that second-hand smoke is not dangerous. Until the full effects of second-hand vaping are known, it makes sense to be proactive versus reactive, and New York is just the latest state to take steps to ensure cleaner indoor-air quality for everyone.