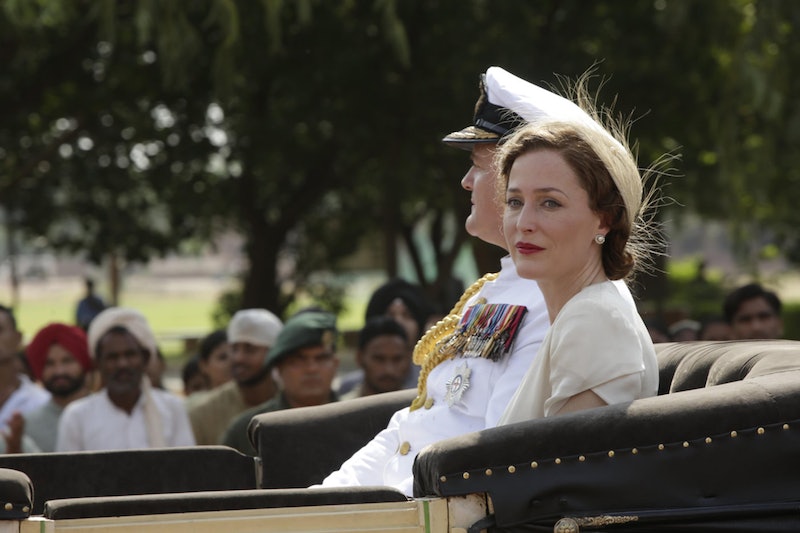 After learning about her family's experiences with the Partition of India in an episode of Who Do You Think You Are? in 2005, director Gurinder Chadha felt inspired to tell part of her family's story through the medium of film. This became a reality in 2017 with the release of Viceroy's House, which you'll be able to catch on BBC Two on Saturday Aug. 24. So is Viceroy's House based on a true story, or is it a fictional story inspired by the events of the partition of India and Pakistan?

Obviously, there's only so much history you can include in 100 minutes, but Chadha manages to cleverly intertwine fiction with reality in this gilm. The director uses the ornate setting of Viceroy's House (now known as Rashtrapati Bhavan) in Dehli as her backdrop, and places the real-life figures of Lord Louis Mountbatten (played by Hugh Bonneville), who oversaw India's independence from Britain in 1947, and his wife Edwina (Gillian Anderson), at the centre of her tale.

"By setting the entire film in Viceroy's House [...] I was able to bring under one roof the Mountbattens, the key Indian leaders (Nehru, Jinnah and Gandhi), and the 500 ordinary Indians Hindu, Sikh and Muslim — who served the Mountbattens as domestic staff," Chadha wrote in a piece for The Guardian prior to the release of the film.

However, Chadha included other, fictional, storylines — including a romance between the characters of Jeet (Manish Dayal) and Aalia (Huma Qureshi) — in the film to expand the story beyond it's true-to-life origins.

In her piece for the Guardian, Chadha explained: "To reach a global audience, I knew that I had to make my film entertaining and accessible. What better way than to visually embrace the splendour of the Raj, of Viceroy’s House, and to use humour and passion to tell a tale of upstairs and downstairs life in the grand tradition of Gosford Park and Downton Abbey."

"In the microcosm of that great house, I was able to explore the multiple points of view from the protagonists, and grapple with the idea of partition without being overwhelmed by its tragedy. I do not believe anyone but a British Indian — a product of Britain and India's inextricable links — could truly inhabit these differing perspectives. I can only hope that I do them justice."

During the promotion for Viceroy's House, Chadha explained that the film was a way for her to "provide a new perspective, born out of her Sikh-Indian heritage and experiences growing up and living in Britain," as the BFI writes.

"My parents always said the British did 'something', but no one knew exactly what it was," she told the film organisation. "The concept of British 'divide and rule' felt abstract; it didn't explain how this tragedy could have happened. After making Viceroy's House, I understand the global significance of partition and the true tragedy of its legacy."

While the film was positively received by some critics, others were not happy with the way it represented the tragic event at the centre of its narrative. Fatima Bhutto wrote in the Guardian that it was "a glossy imperial version of India’s traumatic partition that scandalously misrepresents the historical reality."